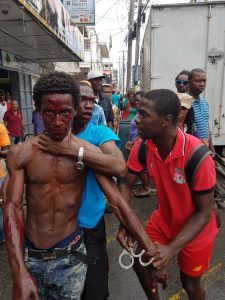 A City Constabulary Lance Corporal was arrested by Guyana Police Force investigators as they probe his shooting death of a detainee just outside the City Constabulary outpost near Regent and Bourda Streets Monday afternoon.

Dead is Marlon Fredericks, the son of broadcast journalist and producer, Claudette Fredericks. He was said to have been mentally unstable.

“A City Constabulary Lance Corporal has been taken into police custody following the fatal shooting of thirty-four year old Marlon Fredericks of Tiger Bay which occurred about 13:15h today outside of the City Constabulary Outpost at Regent and Bourda,” the Guyana Police Force said.

The national police said the detainee, who was in custody at the outpost for assault peace officer and simple larceny, allegedly forced his way outside of the lockup when it was opened to let out another prisoner to use the toilet.

He was shot in his back during a scuffle, police said they were told.

“A struggle reportedly ensued between the victim and the lance corporal who tried to restrain him and in the process the prisoner (victim) ran out the Outpost and was fatally shot once in the lower back by the Lance Corporal who was armed with a Service Pistol.,” police said.

The weapon along with eight live rounds and a spent shell ,has been lodged as investigations continue.

Chief Constable Foo confirmed that the incident occurred and that the Guyana Police Force has been called in to investigate the “shooting matter.”

He was shot just outside a cell phone store immediately west of the Constabulary outpost. Other sources said the man was shot in his lower back and by the time first responders arrived on the scene to take him to a hospital, the blood was clotted.

Foo said preliminary information received indicates that the man fled shortly after the lockup was opened.

However, reports are that the detainee earlier Sunday asked his mother to visit him. When she turned up at the outpost with her aunt, Marlon rushed to see them and exited the outpost.

One day before, on Saturday the Guyana Police Force said Marlon Fredericks was seen on King Street, Georgetown by an armed city constable.

The 34-year old man assaulted the law enforcement agent and escaped. When he was recaptured in the vicinity of Colours Boutique on Robb Street, police said he attempted to disarm the City policeman.

“In another bid to escape detention, the suspect grabbed the rank’s service pistol and tried to disarm him during which process,a round was discharged without any one being injured; with the assistance of public spirited citizens, the suspect was subdued and handed over to ranks of a police mobile patrol,” the Guyana Police Force said.

The suspect as well as the arresting rank were treated at the Georgetown Public Hospital. Fredericks was kept for observation under guard and later discharged.