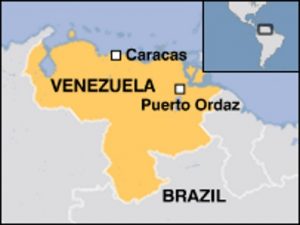 As political and economic unrest in neighbouring Venezuela spreads, the Guyana government on Friday said it was paying keen attention to the welfare of Guyanese in the neighbouring eastern Venezuelan town of Puerto Ordaz and would be willing to help them return if the situation worsens.

“If we felt that life, limb and property of Guyanese who are there, and who require assistance of the government to relocate to Guyana, we are prepared to provide that service,” Minister of State, Joseph Harmon told a post-cabinet news briefing.

He added that, in keeping with Guyana’s international obligations, both Guyanese and Venezuelans would be provided safe haven here. “In the event that something over-spills in Puerto Ordaz, what I can say to you is that we have made arrangements at our side of the border to receive those residents and even Venezuelans who are fleeing from violence in those communities; we have an international obligation to provide certain limited facilities for them,” he said.

He noted that government has realised that affected persons do not wait on the administration to assist them, but instead they cross the border into Region One (Barima-Waini) to areas such as Morawhanna, Mabarama Port Kaituma and Moruca.

“We have a robust immigration outfit there, we  have also a robust medical facility in the area,” he said, recalling that Guyana’s health facilities were last year made available for Venezuelans to seek medical facilities.

There are between 25,000 and 55,000 Guyanese living in Puerto Ordaz where looting and scattered protests broke out earlier this month.

Residents have become increasingly angered by food and medicine shortages especially at a time of a malaria outbreak.

Reeling from four years of economic recession partly due to a slump in world oil prices, that oil-dependent economy has recorded numerous looting of food stores and sporadic protests in Puerto Ordaz.

Back in the 1980s when Guyana had suffered massive food shortages, thousands of Guyanese had settled in Venezuela from where they had smuggled basic necessities such as cooking oil, toilet tissue, butter, wheaten flour, soap and other items to Guyana’s coastal communities where there had been a ready and lucrative market.