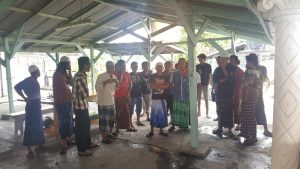 Twenty-six Indonesian fishermen walked off their job at Pritipaul Singh Investments (PSI), a local seafood company, over a pay dispute, prompting the intervention of the Indonesian embassy, sources said.

The sources told Demerara Waves Online News that the men decided to leave the vessel last week Tuesday because of unresolved pay-related issues.

They are being accommodated temporarily at the Providence Masjid, East Bank Demerara where they are being fed and allowed to pray.

The fishermen, according to the sources, were peeved that they were not receiving a bonus all the time regardless of whether or not they exceed their catch of marlin and tuna. Also said to be of concern to the workers is a loss of earnings when they transfer their US$400 monthly salary to their dependants in Indonesia.

The official of the Embassy of Indonesia is next week Monday expected in Guyana to meet with the aggrieved fishermen and their employer in the presence of a member of the local Muslim community.

Meanwhile, Minister of Citizenship and Immigration, Winston Felix said he was unaware that a number of Indonesians were in problems in Guyana.

He said their employer, who might have sponsored their arrival in Guyana, first has to write government before his ministry could take action.

“The employer has to writes us then we will check on their status.  We cant presume what we don’t know about,” Felix told Demerara Waves Online News.

The Minister of Citizenship and Immigration added that “we will not send anyone to search for them unless I have a proper case on which to act on.”