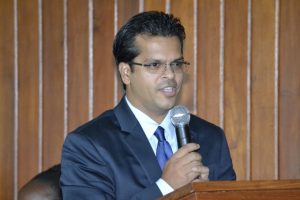 The Guyana Energy Agency (GEA) will be spearheading the installation of solar power systems on 44 more government buildings this year, as part of the administration’s “green” economy thrust.

Sharma who was speaking on the agency’s 2017 performance and plans for 2018 at a recent forum, explained that the investment cost of this initiative is estimated at $260M with a simple payback period of four years.

According to the CEO, in 2017 the GEA installed solar PV systems on the roofs of 70 government buildings. He added that with regards to the 2017 energy efficiency programme, inefficient lights were replaced and contracts were awarded to install 10,427 light-emitting diode (LED) lamps and 3,766 occupancy sensors at 46 government buildings all of which will be completed in the first quarter this year.

“Some locations where the LED lights were installed include Vergenoegen, Uitvlugt, Stewartville and Anna Regina Secondary Schools, Ministry of Business and National Centre for Educational Resource Development (NCERD),” Sharma was quoted as saying by government’s Department of Public Information.

Sharma said, “the buildings were selected based on a request by GEA to the various Ministries and government entities to identify buildings for the installation of solar PV systems and the replacement of inefficient lighting systems.”

Though the previous year was a challenging one with tough deadlines, Sharma said the agency was able to deliver its work programme and will continue to so in the new year.