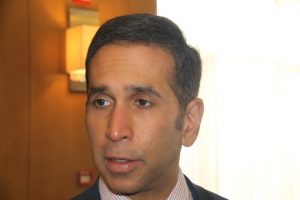 Trinidad and Tobago’s Attorney General, Faris Al Rawi on Wednesday advised that Guyana should guard against small-scale opportunists who may want to wash dirty money in a growing oil and gas sector.

He said Guyana would not face a high risk from from the sale of oil and gas by oil producing countries or established downstream companies that provide related services, but the biggest risk could come from small scale enterprises.

“What you may have- and any country would have a risk is the people on the fringes; people that see sales on an exponential basis from persons who did not check for abuse of funds so you see abuse of trust or laundering proceeds of money masking it as investment in some fringe industry associated with oil and gas,” he told reporters on the sidelines of the 46th Plenary and Working Group Meeting of the Caribbean Action Task Force (CFATF) being held at the Marriott Hotel.

Al Rawi praised Guyana’s Attorney General, Basil Williams for leading initiatives to go after proceeds of crime in the same way he has been doing in Trinidad and Tobago. “The radical approach we are running on now is ‘explain your wealth’. If you can’t explain it in a court of law, you lose it,” he said, adding that financial criminals “park money” in cash, businesses and land. 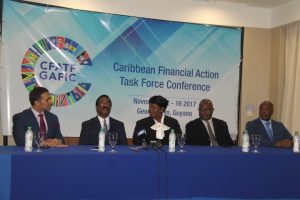 “I am not saying this because I like your AG (Attorney General) but he is in the right direction. Your present government is, certainly from my outside perspective, following the right path and in this particular (CFATF) environment you will see that there is a serious collaboration. In fact, it’s much more dynamic collaboratively than Caricom (Caribbean Community) is because you have your technocrats and your team leaders… actively at work with each other and we are sharing information and we are sharing strategy,” he said.

The Trinidad and Tobago Attorney General remarked that terrorist financing has implications for his country’s oil and gas sector and, as a spin-off, other countries whose petroleum companies operate in the twin-island nation. “Much of the British pension, the United Kingdom pension is based upon profitability of companies like British Petroleum. BP and other countries have massive developments in Trinidad and Tobago so any effect to our jurisdiction has a ripple effect globally so we are taking this business very, very seriously,” he said.

Citing the porous borders of Caribbean borders including those of Guyana, he urged that this country which is scheduled to begin commercial oil production in 2020 to secure itself from terrorist financing. “All of us need to consider what our countries look like, particularly countries like Guyana that are now coming into proven reserves that are significant in an oil and gas context so bear in mind,” he said.

Attorney General Al Rawi called on Caribbean countries to be “eternally vigilant and proactive and there must be no room for tolerance of terrorism or radicalism”.

Back in 1990, a group named the Jamaat-al-Muslimeen had toppled the Trinidad and Tobago government in a bloody coup. Years later, several of that country’s nationals have travelled to Syria to join Islamic State combatants.