“If the Speaker and the government try to truncate us raising these legitimate concerns of people across Guyana and try to shield the minister from him giving explanations for him acting contrary to the legislation that they themselves passed, then you are going to see major expressions of disapproval from our side,” Jagdeo told a news conference.

Jagdeo’s announcement came 12 days after he and other People’s Progressive Party Civic (PPPC) parliamentarians chanted slogans and held placards throughout President David Granger’s address to Parliament on the day- November 2, 2017- that parliament resumed from its two-month recess.

The House Speaker has not yet let his views known publicly about the disruption of Granger’s speech. President Granger has already called the PPP lawmakers “vulgarians” and Jagdeo has since lashed back, saying he was guilty of “hypocrisy” and he has no respect for the Guyanese leader. 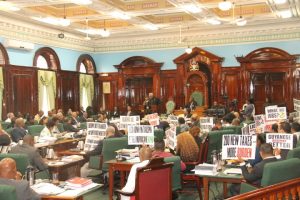 It was not immediately clear what firm the “major expressions of disapproval” would take. “Our members of parliament are in no mood to go there and to be controlled in a narrow framework where the government will once again hide behind parliamentary rules to avoid open debate on these issues,” he said.

Jagdeo has said that he has learnt that the House Speaker was unlikely to allow a full-fledged debate in response to the tabling of the estimates for the Constitutional agencies.

While the PPP has 32 seats, one less than the governing coalition, the Opposition Leader said his side of the House would not be proposing budget cuts for those agencies. He said nothing has changed because the Finance Minister was still cutting budgets of those agencies.