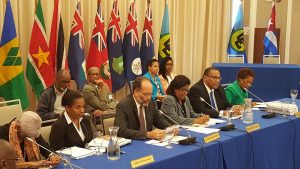 The Caricom Secretary General said the key is to find a mechanism such as a bilateral Caribbean-UK trade agreement that would allow for “a rollover of the trade with us on the same preferential access”.  “It would amount to something like that. This is part of the technical discussions that is ongoing,” he said.

La Rocque hoped that the Caribbean and the UK would be able to able to finalise a new trade arrangement to ensure “there is no break in the trade” between the two sides.

The UK accounts for about 21 per cent of total Caribbean exports to the EU. For the purposes of the EPA, the Forum of Caribbean States includes the 14 independent member- states of Caricom and the Dominican Republic.

By referendum, the UK decided to break away from the EU.