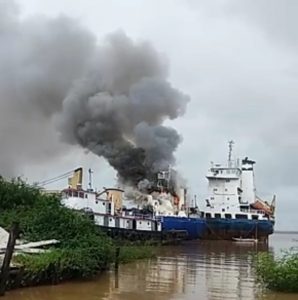 Fire Chief, Marlon Gentle told Demerara Waves Online News that fire fighters have since been dispatched to inspect the fire scene aboard the MV BELLE.

There were no reports of injuries due to the fire that began at about 10:55 AM.

The vessel is owned by the Amin family. Guyana’s Maritime Administration (MARAD) said it has since launched an investigation into the blaze aboard the St. Vincent and the Grenadines-registered vessel.

MARAD said efforts were being made to have the vessel, which is owned by Ferouz Amin, registered in Guyana.

in September 2017, the Guyana government awarded a US$1.4 million contract for the construction of a fire boat to be stationed at the Demerara Harbour. The United Kingdom-based Angloco has been paid to construct the vessel.