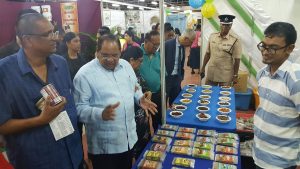 Prime Minister Moses Nagamootoo and First Vice President of the Guyana Manufacturing and Services Association, Ramsey Ali visiting one of the booths at the Uncapped expo for agro-processors. In te background is Minister of Business, Dominic Gaskin (in suit).

He told Demerara Waves Online News that the idea would be presented to Finance Minister, Winston Jordan and other ministers when GMSA representatives meet them at the next roundtable that has been established to iron out constraints and examine initiatives.

The idea of a huge agro-processing facility was also  publicly floated by GMSA President, Shyam Nokta in addressing the formal opening of the October 27 to 29 agro-processors’ trade fair named ‘Uncapped’ being held at the Sophia Exhibition Centre.

“The GMSA also believes that having a centralized agro-processing facility will make a big difference. This could be built modularly and through a Public Private Partnership,” said Nokta.  He said such a model has been successful in Guatemala, Belize and other countries.  “Why can’t we do it here? Just imagine the difference it would make if the farmers from Black Bush Polder or Canal Polder know there is a place where they can take their produce and receive a fair price. This will certainly help to strengthen the economic position of farmers and encourage stable supply,” he said. 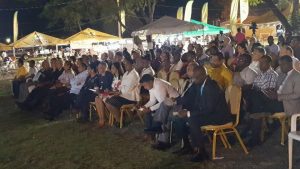 A section of the audience at the opening of Uncapped, an expo for small and medium-sized agro-processors.

The GMSA executive member cautioned against placing too much emphasis on oil whose global prices which could plummet to as low as US$40 per barrel which would result in a dip in Guyana’s projected revenues.

That private sector organisation also want government to present its policy on agriculture and agro-processing, rather than merely establishing the  the turmeric factory in Region One (Barima-Waini), the cereal factory in Region Two (Pomeroon-Supenaam), and having successful trials which have grown potatoes in Guyana, among others.

“While commendable, for these and other initiatives to sustain, grow and expand to commercial viability they need to be situated within a clear policy framework for agriculture development and agro-processing,” Nokta said. 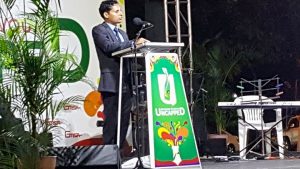 President of the Guyana Manufacturing and Services Association, Shyam Nokta addressing the opening of Uncapped.

Addressing a wide cross-section of persons including government ministers, diplomats and business executives; the GMSA President also recommended that agro-processors be provided affordable finance on soft repayment terms, the provision of cheap and reliable electricity through an energy mix that can include power from the halted Amaila Falls hydro power project and natural gas, provision of primary processing facilities near farms, reduce taxes on manufacturers and agro-processors, removal of non-tariff barriers, and improving laws, regulations and standards.

They include approving the Food Safety Bill, establishing National Testing Laboratory and Reference facilities, technical support for ISO and other certification and supporting research and development;

“Encouraging a value-chain approach – there are positive signs already where large and medium scale operations are working with small operators – these need to be supported,” Nokta said.

At least 60 exhibitors have taken advantage of the GMSA-organised agro-processors exhibition, with the aim of showcasing their products for greater penetration of local markets.

2017-10-28
Denis Chabrol
Previous: PPP, Afro-Guyanese groups slam each other over “Indian” vs “Afro” GECOM Chairman
Next: Private sector must stop lamenting about political instability and stay out of politics- Business Minister