GPSU promises “stepped up militancy” but sets no date 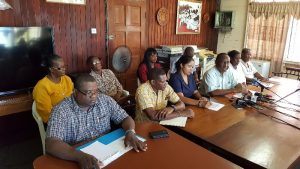 The Guyana Public Service Union (GPSU) on Friday vowed to embark on “stepped up militancy”,  in the wake of government’s unilateral wage and salary increases ranging from eight percent at the lowest salary to half percent up to GYD$1 million.
Union President, Patrick Yarde accused Minister of Finance, Winston Jordan as having the same approach to public servants’ wages and salaries when he had been Budget Director under the Finance Ministerial tenure of Bharrat Jagdeo.
“We are faced with the same attitude when Jagdeo was Minister of Finance when Winston Jordan led the PPP negotiating team in 1999,” Yarde told a news conference.
In response to imposing “peppercorn” salaries, Yarde signaled that the GPSU would engage in “nothing short of significantly stepped up militancy”, he said.
He declined to say how soon the union would be reaching out to its membership to engage in industrial action.
Yarde said the GPSU is sympathetic to the Guyana Teachers Union (GTU) which was told Wednesday that educators in the public school system would be granted the same increase as public servants.
He lampooned government for violating International Labour Organisation conventions and collective bargaining. “This boast about collective bargaining is not collective bargaining. It is CB. co.. brand,” he said.
He said public servants were “feeling btrayed and we had an expectation that there would have been positive change”.
Saying the government could pay more to the “people in the public service who are slaving,” Yarde said despite opposing the unilateral imposition of meagre wages and salaries, they should take the offer.
“They need money. Let them take it. It won’t compromise this union,” he said.
The GPSU Presidenr said his union “decided to step back” after President David Granger had said the 2016  negotiations had not been deadlocked.