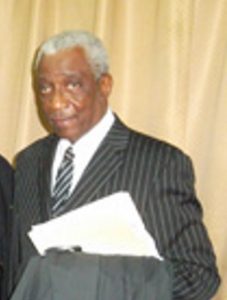 Opposition Leader, Bharrat Jagdeo said President David Granger has informed him that he has decided to appoint Retired Justice James Patterson as the next Chairman of the Guyana Elections Commission (GECOM), sparking off a decision by the People’s Progressive Party (PPP) to refuse to cooperate with the government.

“Right now this government will not get our cooperation on any issue until they start complying with our constitution,” Jagdeo told a news conference at Freedom House, his party’s headquarters.

He said the PPP’s councillors at the Neigbourhood Democratic Council and Town Councils would not be lending its support to councillors in those districts and regions where his party has a majority.

Patterson is due to be sworn in by President Granger at State House Thursday night at 8:30.

Jagdeo said the appointment of Justice Patterson amounted to a conflict of interest because he was hired by the Granger-led administration to chair a Commission of Inquiry into the military and he is currently an advisor to the Minister of Legal Affairs and Attorney General. “It seem as though the President has picked someone who is in the employ of the government,” he said.

Jagdeo said any time the seventh person- the Chairman of GECOM- is picked unilaterally violates collaboration and merely went through the process to appear democratic by instead frustrating the process.

“What we have here tonight is  a fundamental assault on our democracy by an undemocratic corrupt cabal,” he said.

The Opposition Leader accused Granger of being a liar and someone who could not be trusted. “You can’t take him at face face value… At the heart of this presidency lies a very sinister nature,” he said.

Jagdeo said the unilateral appointment of Patterson is a part of a plan to rig the elections as had been the case between 1968 and 1992, adding that the PPP would have to again struggle for democracy. He said the international community and civil society would be apprised of moves to engage in electoral malpractices.

“This is an attempt to take our country to the past and attempt  to rig the next elections,” he said.