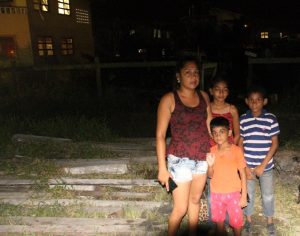 Nicola Singh and her children outside the rubble of her home at 1892 Diamond Housing Scheme, East Bank Demerara.

A single mother, her four children and their grandmother were Wednesday afternoon left homeless as a result of a fire caused by one of them playing with a squib inside the house, the woman said.

“They said the children were lighting a scratch-bomb in the house and it sparkle up… I was not at home. I was at my business place and my Mom was at home. She was bathing and she didn’t know they would have lit the squib,” Nicola Singh told reporters.

Singh said she was told that her seven-year old son was playing with the lighted squib when tragedy struck.

The woman said they bought the squibs for the Diwali season and she “put them up but I don’t know how they find it earlier”.

The woman said she was at her beer garden located near First Bridge, Diamond, East Bank Demerara when she received a call at about 4 PM, informing her that her one-flat wooden house was on fire. 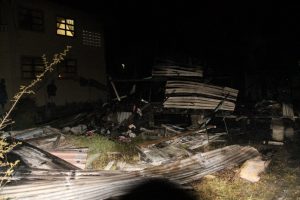 She appealed to the authorities to help her replace vital documents such as birth certificates, her passport and house-lot application documents. “Next year, the girl preparing to write Common Entrance but everything burn up for her,” she said, adding that she also lost cash and jewellery.

The woman said she owned the house, but the land belonged to her mother, Carmelita Nirmal-Singh, who has since taken up refuge at a next door neighbour.

A relative hoped that the destruction of the house by fire would convince the Housing Department of the Ministry of Communities to urgently allocate a house lot to the  woman and her kids.