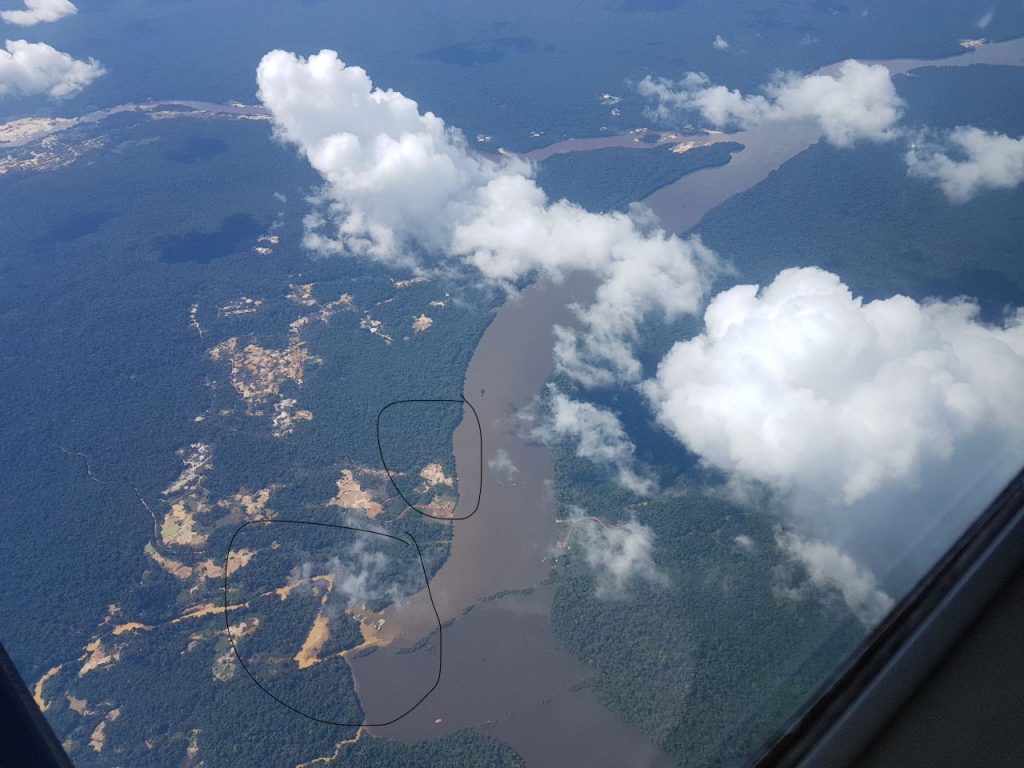 Mango Landing, October 1, 2017: The lower circle is where you can see dredges going into the river bank. The circle above it is where the police station is located.

Six months after grave concerns were raised about mining of river banks for gold in Guyana’s interior and heavy pollution of waterways, evidence has surfaced that the practice continues even close to a police station.

Photographs provided to Demerara Waves Online News from a well-placed source shows several bruised and scarred river banks in a number of areas. One of the most affected is the Konawaruk River where on October 1, 2017 dredges were seen going into the river bank. Also seen was another at Mango Landing on the same date not far from a police station

Minister of Natural Resources, Raphael Trotman admitted that the problem of undesired environmental degradation continues to be a major one.

He said money would be allocated in the 2018 budget to buy drones and recently trained environmental wardens would be deployed to several trouble-spots to enforce the relevant laws and regulations. 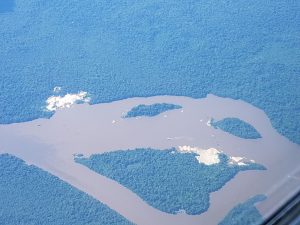 “It continues to be a bug bear and we are responding as best as we can with limited resources whenever a complaint is made by a community or aircraft operators send information. Now that wardens are in operation we intend to make this a priority and will be deploying drones to assist in monitoring and enforcement,” Trotman told Demerara Waves Online News.

Twenty-five Natural Resource Wardens, who graduated last month, have been tasked with clamping down on the capture and sale of endangered species and the protection of the environment.

In apparent response to the fact that one of the mining operations was being conducted relatively close to a police station, the minister said “we need other law enforcement agencies to lend support.” The mining of river banks is illegal.

Commissioner of the Guyana Geology and  Mines Commission (GGMC), Newell Dennison told Demerara Waves Online News that enforcement against mining of river banks continues and persons are being caught several times each month for engaging in the malpractice.

He said the officers would be informed about the latest instances in Konawaruk and Mango Landing with a view to taking action. He said one of the ongoing challenges is that illegal gold mining operations are conducted in the night.

The worsening problem in which rivers and river banks have been destroyed and turbidity levels are at unacceptable levels due to mining effluent was highlighted as recent as April, 2017 by the Guyana Human Rights Association (GHRA).

When the issue had been highlighted then, the Ministry of Natural Resources had announced that a team from its Compliance Section and the Guyana Geology and Mines Commission would have been deployed to the areas such as Puruni, Jawalla and Imbaimadai.