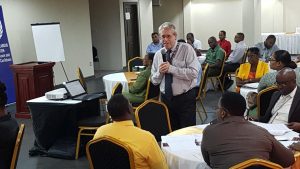 Workers in poor working conditions who are not paying income tax to the Guyana Revenue Authority (GRA) and contributions to the National Insurance Scheme (NIS), are the subject of a new plan being spearheaded by the Labour Department.

There are no available numbers, but the International Labour Organisation (ILO) estimates that between 40 and 50 per cent of workers are in the informal economy and have no access to basic befits being provided by the state.

“We are now sharing experiences as a way to develop a strategy on how we can transition the informal economy into the formal economy. It is now a beginning,” Chief Labour Officer, Charles Ogle, told Demerara News Online.

According to Ogle, there are long term implications for workers in the informal economy when they reach retirement as they will have nothing to get from the state.

“Even during the period of employment they will need to get glasses, dental and other sickness benefits, maternity; they don’t have pension. They maybe working long hours, they don’t get leave, maybe they are being paid the minimum wage. It is a benefit to the workers that they be aware of employment in the formal sector,” Ogle stated.

However, some workers tend to remain the informal economy, but Ogle dispelled the notion that workers fear victimisation, pointing out that most are not attracted to the government service because of low pay.

He noted that some workers in the informal sector might be getting a higher pay because they are provided a contract with the responsibility to pay NIS and  income tax, but do not remit the payments.

“If they are in the formal economy those are mandatory deductions to NIS and GRA,” Ogle stated.

A pilot programme was conducted between May and August where labour inspectors targeted Regions 2, 3, 4, 5, 6 and 10. According to Ogle, 177 persons were analysed.

The findings formed part of Guyana’s presentation at the ILO’s two-day workshop on the informal economy which concludes Wednesday at the Tower Suites, Main Street. Suriname, Belize, St. Lucia and Jamaica are also sharing their experiences.

2017-10-11
Writer
Previous: Berbice man remanded for drugs in salt bag
Next: Remote community in Guyana to be powered by solar energy