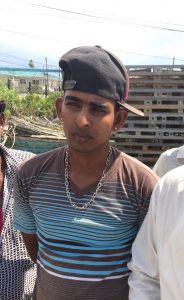 Just before his court appearance for the murder of Mahendra Ghanie, 21, the alleged mastermind behind the crime allegedly made death threats to a relative of the slain man.

According to 28-year-old David Gangapersaud, whilst driving on the Skeldon Public road earlier today, he was stopped by a police vehicle and was told by an officer to not drive directly behind the van.
It was at that time the murder accused, 44-year-old Bharrat Ramsarwack threatened to have him killed.
“When the police van pull up corner me, he bin sitting at the back with two police and he seh he gon send people fah buss me throat and done me,” Gangapersaud said.
The now terrified man related to Demerara Waves Online that he and the suspect had good relations up until the murder of his cousin. He is now concerned for his safety.
“Me and this man nah had no problem. And now me frighten he could send people fah kill me”.
The matter was reported to Springlands Police Station and investigations are ongoing.
Ramsarwack, a minor and an employee were charged with the murder of Mahendra Ghanie. The men reportedly confessed to killing the laborer after family members discovered his burnt human remains in a pit behind the businessman’s home.