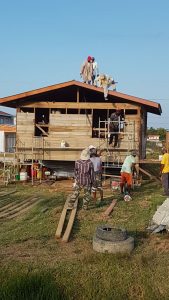 Fifty-eight year-old Sheila Harricharan, whose house was destroyed in the recent storm that hit the Bath Settlement community, West Coast Berbice,  will no longer be forced to reside in a makeshift shack as works have commenced to rebuild her home.

As was promised by Prime Minister Moses Nagamootoo who visited the area some days after, Harricharan would have a roof over her head by the end of the week.
“I am sorry that this lady had to stay under her house. I expected her house to be restored within one day,” Nagamootoo told Demerara Waves Online News.
He said he was told that the ruck with materials had broken down. He said
Private businessman pitched in with Civil Defence Commission to rehabilitate house Wednesday after he met with them.
The PM, along with members of the Civil Defence Commission, had pledged their support to the victims to provide building materials so that the damaged dwellings could be repaired.
He had said that “although, the needs were not ‘very great’, they are pushing for the collapsed house to be rebuilt so that the woman can return home”.
But those repairs had been delayed due to the unavailability of the materials to get the job done forcing the woman to construct a ‘shack’ under the home.
The woman relayed that after the PM’s visit on Friday September 22nd, she was assured that her home would have been completed. She stated that the contractor went  that afternoon, started some works and returned on Saturday to continue. At that time, the woman stayed with a neighbor. But to her shock and disappointment, the contractor had reported that he did not have enough materials to finish her home leaving her home incomplete.
Meanwhile, Gewan Singh of G.Singh Construction has told Demerara Waves Online News that he was constructing the house free of cost. He said the delay was caused because all of the materials that were provided have finished.
He said work would resume shortly because more materials are expected soon, based on information provided by the Region Five administration.
This promise was kept and the woman is expected to be back in her home by the end of the week.