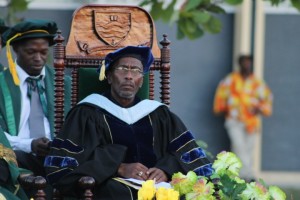 University of Guyana workers want the administration of that tertiary institution to justify a pay-hike increase of six to eight percent, according to Workers Union (UGWU) President, Bruce Haynes.

Haynes said workers might be inclined to accept the pay increase- six percent for academic staff and eight percent for support staff- if they are told how much money is available for wages and salaries.

“We want to know who are the people who will get the  six percent in the UA (academic) category. Show it to the staff if you want them to be on the same page with you,” Haynes told Demerara Waves Online News. He hinted that workers might be willing to accept the pay hike if they are told the facts to prove that the university is in a financial bind.

Haynes said his union wants a 10 percent increase in wages and salaries for non-academic staff whose starting salary is an estimated GYD$50,000. Professors’ gross salaries are about GYD$300,000 to GYD$400,000.

This publication was told that the administrative staff would be on a retreat and would be available until next week Tuesday. Efforts to contact University of Guyana Registrar, Dr. Nigel Gravesande on his mobile phone were futile.

The UGWU President said a meeting would be held with workers next week to chart the way forward. Haynes charged that University of Guyana Vice Chancellor, Professor Ivelaw Griffith appeared bent on hiding the figures for fear that they would show that a huge chunk of the pay increase would go towards his bloated bureaucracy. “He has not been truthful. By hiding numbers, you don’t know what is the truth. There are so many things that are hidden. He has an inflated staff now so with an inflated staff where is the money coming from,” asked Haynes.

Haynes said unfortunately, the negotiations were held between the unions and the university’s administration instead of the Council because the tertiary institution has been without that top decision-making body since July.

The UGWU President cautioned against relying on tuition fees as a revenue source to pay wages, arguing that government’s subvention is guaranteed cash sources. “We are saying you can’t look at student numbers because those are uncertain. You can play around with the subvention because that is more sure. As the monies come in from the students, you can talk some more and get so more,” he said.

The UGWU and the University of Guyana Senior Staff Association (UGSSA) have already calculated that of the GYD$181 million set aside for wages and salaries, the seven senior administration staff would cart off about 25 percent of that amount in contrast to the other 753 workers. “The Unions do not believe that such a situation is a fair one. It also contradicts the administration’s own stated belief in affordability,” the unions have said in a missive.

They noted that almost every member of the senior administration group more than  GYD$635, 176, 000 per month, since they are outside the salary bands.