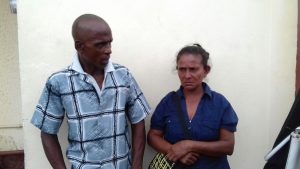 Following the murder charge laid on 19-year-old Omardai Christopher, the lad’s father, Peter Christopher, claims that his son is innocent of any wrong doing.

“God gone deal with ayuh. My son innocent,” and “We gon’ protest,” he shouted while his son was being transported out of the New Amsterdam Magistrate Court in handcuffs earlier Wednesday moments after being charged with 29-year-old Hillary Edwards for the death of 13-year-old Leonard Archibald. Meanwhile, the lad’s father said he was pleased that the men were charged and he hoped the police conduct their investigations properly to ensure justice is served. 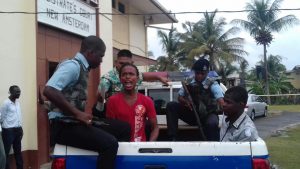 Omardai Christopher and Hillary Edwards at the New Amsterdam Magistrates Court on Wednesday.

According to Peter Christopher, his son, who began living on his own for the past three months, took Hillary in after he was kicked out by his parents approximately one month ago and had no idea that the suspect was allegedly involved in such acts.

The older Christopher told reporters that his son on the night of September 17, 2017 was at the birthday celebration Leonard Archibald and his sisters attended.

The man stated that his son left the party for home at around 7:30 pm. Upon reaching to his gate, he noticed a bicycle lying in front of the pathway and saw Hillary at home. That two-wheeled vehicle later turned out to be the bicycle young Leonard Archibald was last seen with. 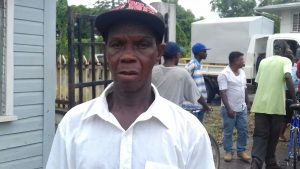 The man also stated that his son told him that he heard a faint scream coming from the house but did not pay much heed to it.  “He see the bicycle when he went home and see Hillary home deh and he hear like somebody screaming but he nah pay no mind to it and with the lil drinks that he had in his head, he leff and go back to the party”.

Peter Christopher noted that his son then returned home and noticed that the bicycle was missing along with Hillary.

He stressed that it was only after reports surfaced that he realized something was amiss. He noted that several persons at the party could attest to his son’s story. The man vowed that he would be standing behind his son and will ensure that his name is cleared of the ‘stigma’.

He further said that Hilary is willing to attest that his son played no part in the crime. The man claims that Hillary made efforts to speak to the station sergeant at the Reliance Police Station, East Canje but was denied the request.

Questions were raised by spectators as why Omardai Christopher did not report the suspicious scream he heard to the Sister’s Police Station located just two blocks away from the home. He was also questioned as to why his son who invite ‘a serial rapist’ to reside with him to which he answered ‘his son was not aware’.

The duo was remanded to prison until December 8, 2017 by which time police would have already filed statements.