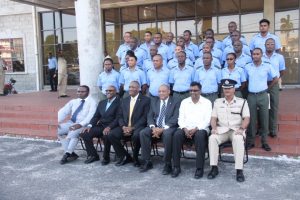 Guyana on Thursday rolled out its first batch of natural resources wardens with full police powers to enforce environmental and and conservation laws in the natural resources sector, but they were charged by Police Commissioner David Ramnarine not to become powerful.

Minister of Natural Resources, Raphael Trotman said the rangers would be responsible for intercepting the illicit trade in wild animals and birds, reptiles, search and rescue or the rescuing of trafficked persons. “That is the nature of your work. The national patrimony of Guyana is not only what you can touch; it is about the ethos of who we are. We are not to stand for nonsense and we are not to stand at all to see lawlessness, abiding or to turn a blind eye to things we know that are wrong,” he said.

The 25 wardens, who come under the umbrella of the Ministry of Natural Resources, underwent a four-week training programme from August 14- September 8, 2017 that focused on intelligence gathering, care and custody of prisoners, initial action at crime scenes, use of force, ethics in law enforcement, occupational health and safety, powers of arrest, customer service, security of arms and ammunition, emotional intelligence, and dry and live-firing exercises.

“When deployed, the primary focus of this unit will always be to strengthen the protection, conservation and sustainability of Guyana’s natural resources. As a legally authorised law enforcement unit operating within the GNR sector,however, it is expected that the men and women of this unit will uphold and defend, under all circumstances, the laws of Guyana,” states the Ministry of Natural Resources.

Trotman said the corps of wardens would fuse the separate regulatory bodies such as the Guyana Geology and Mines Commission, Guyana Forestry Commission, Environmental Protection Agency, Wildlife Division and the National Protected Areas Commission.  He said the wardens would not be replacing the Guyana Police Force, Guyana Defence Force or any of those regulatory bodies.  “You are there to support their work,” he said. “They outrank you both statutorily and by experience,” he said.

The Police Commissioner charged the Guyana National Resources Wardens, who are all sworn supernumerary constables, not to overstep their authority but remain humble. “Not only are you equipped, not only are you empowered but I urge you not to become powerful. You are empowered, you are equipped with skills and knowledge. Do not mistake of believing, acting and thinking that you are powerful, particularly with the oath you would have taken to serve without favour or affection, malice or ill will,” he said.

Minister of Natural Resources, Trotman similarly called on the rangers to have good inter-personal skills in enforcing the laws and regulations. “As you come into contact with people, don’t feel that you are mighty force unto yourselves, demand respect and show respect and it would be given to you,” said Trotman who had seen the operation of rangers in Uganda.

The Guyana Defence Force and the University of Guyana have also assisted in training the first batch of the Guyanese law enforcement personnel.