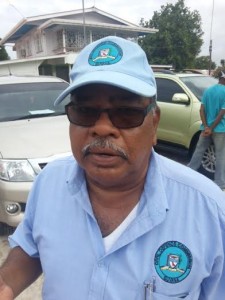 As Guyana prepares to ship 10 containers of emergency supplies for distribution to hurricane-ravaged Caribbean islands, authorities here are prepared to facilitate the settlement of children to attend school, but parents are unlikely to return because they want to cash in on reconstruction, Director-General of the Civil Defence Commission, Retired Colonel Chabilall Ramsarup said Wednesday.

“Some of the people who were affected- Guyanese I’m talking about- recognise that if they return home they will not be part of the rebuilding process and they will lose out. Some of them also have insurance for their buildings so they do not want to lose out,” he told Demerara Waves Online News.

With regard to the children, he said lists were being compiled and Guyanese authorities would first have to ascertain whether there are relatives in Guyana who would be willing to take responsibility for those minors. “It is anticipated that schools in the islands might take about four months before they become operational,” he said. “The parents, who would like to send their children back, we have got to get some firm commitments from them that there will be places to put these children,” he said. Required information for returning children will include their ages, identification of schools for them to attend and medical screening.

The Ministry of Social Protection, he said, has already agreed to provide short-term shelter accommodation to Guyanese, who would like to voluntarily evacuate to their homeland, at the Hugo Chavez Rehabilitation Centre, Onverwagt, West Coast Berbice. “So far, we have not had anybody who wanted to be sheltered,” he said.

Minister of Citizenship and Immigration, Winston Felix is expected to brief a committee, under the chairmanship of Prime Minister, Moses Nagamootoo, about his findings and recommendations following visits to St. Maarten and the British Virgin Islands last weekend.

The storm- affected islands where thousands of Guyanese reside are St. Maarten, Barbuda, Tortola in the British Virgin Islands, and Anguilla. A small number is also in Dominica where the majority of buildings were severely damaged and at least eight persons killed Tuesday by Hurricane Maria. 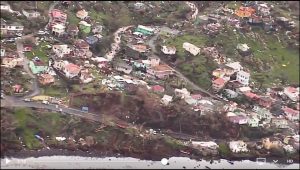 A section of Dominica, devastated by Hurricane Maria.

Ramsarup also said several Guyanese medical personnel, technicians and communications personnel were on standby to be deployed to affected islands. He said steps would be taken to ensure the Guyanese teams receive support for accommodation and meals when they are in those territories.

The CDC Chief said so far the Ministry of Public Health has screened 13 volunteers, including doctors and nurses, to go to the islands devastated by Hurricanes Irma, Jose and Maria. The Guyanese disaster response agency, he said, has also short-listed search and rescue personnel, and disaster management experts in damage assessment, needs analysis and shelter management. A number of them, Ramsarup said, have been drawn from the Guyana Fire Service and the Guyana Defence Force. A number of electrical technicians and communication personnel from the private sector are also on standby.

“I cannot tell you that figure. We just got to look at what arrangements we can put in place to get people there and maintain them,” he said when asked about the total number of Guyanese who would be travelling to islands.

The CDC Director-General appealed to Guyanese to donate monies through its bank accounts at Republic Bank and Guyana Bank for Trade and Industry (GBTI) to help pay for the transportation of 10 containers of supplies, which have been donated by the private sector.

He explained that the containers of lumber, PVC pipes, rice, sugar, wheaten flour and other items would be sent to Antigua under the auspices of the Caribbean Disaster Emergency Management Agency (CDEMA). “CDEMA, which is our umbrella organisation, would know what is required where and they have assured me that they have the resources to move the stuff from Antigua to wherever they are required,” he said.

Government has already provided US$100,000 to CDEMA to assist that organisation in carrying out its mandate.