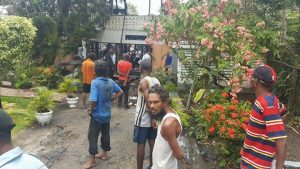 The several suspected drug addicts in the yard of Risan’s photography centre, Main and Lamaha Streets.

Just weeks after a Commission of Inquiry into how well the police investigated an alleged presidential assassination plot, the Guyana Police Force’s judgement Monday appeared set to be called into question again after they rounded up several suspected drug addicts to assist them at an early morning fire scene.

After a female relative of the Sankars, who occupied the building and operated Risan’s and Jarrod’s photocopy and photography centres, expressed grave concern about the employment status of the more than six men, a senior police officer told her that they were taken there to provide manpower or the law enforcement officers would be there all day.

Riyad Sankar, whose 77-year old father, Yussuf Sankar, perished in the blaze also objected to the suspected drug users being on the premises.

The police officer assured that “they are being supervised. You see the difficulty we get to remove these things that we could access down below.” When Riyad said the men were prisoners, the police corrected him and said “they are junkies”. The officer said they would have been supervised in the presence of the police and Riyad. 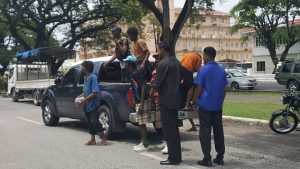 The police officer then yielded to the woman’s concerns and told the men to leave the yard. They were not transported back to Leopold and Cross Streets from where they were collected and instead were seen walking south along Main Street

The more than six men arrived in an unmarked pick-up and after waiting 22 minutes outside the crime scene at Main and Lamaha Streets, Georgetown, police  told them to enter the compound.

A number of the poorly clad men told reporters that they were on Leopold and Cross Streets when the pick-up arrived and they were told to board the vehicle to an unknown destination. One of the men claimed that he was sweeping his grandmother’s yard when a man went in, pointed a gun at him and told him to board the vehicle.

While the men were in the yard awaiting police instructions, one of them complained that one of his knee joints slipped out and he was unable to work. “Watch me knee nuh, and they pick me up from the road…Like you can’t walk the road no more.” Another said he did not have a problem working but he wanted to be paid. “I gun wuk but when i 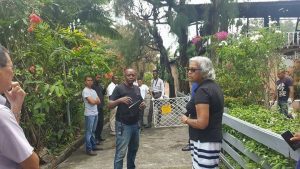 The woman objecting to the police taking several suspected drug addicts to the crime scene to assist them in moving some of the debris. Interacting with her is the senior police officer clad in black jersey and blue pants with book in hand and walkie-talkie clipped to his right pocket.

done i gah’ah geh pay or is problem,” he said.

Sources said he and his three sons early Monday morning left for the Cheddi Jagan International Airport because one of them was leaving the country.

Hours later, the fire occurred and the ailing Yussuf Sankar, brother of prominent city businesswoman, Lyla Kissoon, was burnt in the blaze that quickly devoured the wooden building. Gentle said investigators were working on the theory that the fire was of electrical origin.

The Guyana Police Force was the subject of a Commission of Inquiry into how effective they had probed an alleged assassination plot against President David Granger.