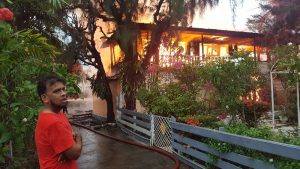 One of Mr Yussuf Sankar’s sons witnessing the fire

A city businessman was Monday morning believed to have been burnt to death in his wooden property that also housed a photocopy and photography centre,

The fire quickly destroyed the building located at Main and Lamaha Streets, Georgetown.

After the blaze is brought under control, fire fighters will search for the body of 77-year old Mr. Yussuf Sankar. One of his sons at the scene insisted that his father was in the building.

Fire fighters also soaked the Prime Minister’s Official Residence due to the intense heat from the fire that quickly engulfed the wooden building that housed Risan’s Photography and Jarrod’s photocopy centre. As the fire raged, there were numerous loud explosions. 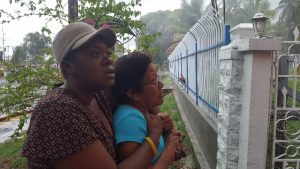 Two of Mr. Yussuf Sankar’s workers looking on as the fire engulfed the building.

Efforts were being made to make contact with one of Sankar’s sons who left Guyana early  Monday morning.

Sankar’s brother-in-law, Hemraj Kissoon, who lives two houses south from the fire scene, described him as very easy going. “As a brother-in-law, he is cool, quiet, very nice. As a matter of fact, the Sankar family is known for that,” Kissoon told reporters at the scene.

As news of the fire spread, workers turned up at the scene and queried about the whereabouts of Sankar.

His car and motorcycle were removed from aback the building.