Minister of Public Security, Khemraj Ramjattan on Thursday declared that he wants Senior Superintendent, Wendell Blanhum back at the helm of the Guyana Police Force’s Criminal Investigations Department when he returns from vacation leave just before Christmas.

He made his position known just days after President David Granger frowned on the top brass of that law enforcement agency related to the findings of a Commission of Inquiry into a more than two-year old alleged plot to assassinate him.

Based on evidence, including confrontations between the accused and the accuser, substantive Police Commissioner, Seelall Persaud, Blanhum and Police Legal Adviser, Retired Justice of Appeal, Claudette Singh have all concluded that there was insufficient evidence to charge Nizam Khan with incitement to commit murder in exchange for rewarding Andriff Guillard with GYD$7 million some time in June 2015. Guillard reported the allegation on March 28, 2017. 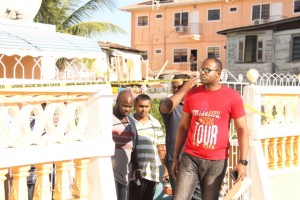 FLASH BACK: Head of the Criminal Investigations Department, Wendell Blanhum leading a team of detectives out of the yard at 51 Seaforth Street, Campbellville where they said the remains of Babita Sarjoon were found in a shallow grave.

However, the Public Security Minister insisted that Blanhum has performed creditably and he should be back at the helm of the Police Force’s Criminal Investigations Department which includes the Major Crimes, Narcotics and Fraud units before the Christmas Season. “I need Blanhum back around Christmastime when, of course, there is always a shoot-up of crimes and so he would take his leave as of now to around that November ending,” he said.

Blanhum, stated the Public Security Minister,  applied in May or June to take “a portion” of his 148 days leave, but his departure had been pushed back partly because of the recently concluded Commission of Inquiry into the effectiveness of the Guyana Police Force’s probe into the alleged plot.

Under Blanhum’s leadership, the Guyana Police Force has swiftly solved several homicides including the murder and shallow grave burial of Babita Sarjoo aback a house near an alleyway allegedly by ex partner after her disappearance six years.

Deputy Crime Chief, Rishi Dass has indicated that he does not want to act as Crime Chief and that he has been in poor health.