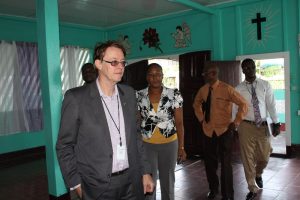 Acting British High Commissioner to Guyana, Mr. Ron Rimmer on Wednesday visited the ancient county of Berbice to identify the body of British woman, 50-year-old Dajee Sarah Rosemary who was found hanging from the ceiling of her friend’s home on Sunday evening.

The woman, who worked as an Accounts Assistant with the British Foreign and Commonwealth Office in London,  was on vacation for two weeks in Guyana when she met her unfortunate demise. 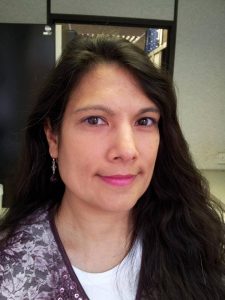 Information revealed that Rosemary traveled to Guyana two weeks ago with her friend and co-worker Jessica Grumble, the one who made the shocking discovery.
Commander of B Division, Paul Williams told Demerara Waves that three persons have been arrested and are assisting the police in their investigations. However, unconfirmed reports suggest that the persons arrested are occupants of the home that Rosemary was residing during her stay.
According to information received, Rosemary travelled to Guyana to spend a three-week vacation. However over the past week, the woman began acting in a very strange manner.
It was reported that the woman began having hallucinations stating that persons were spying on her from the house next door but neighbors claimed that the neighboring house was deserted.
On Saturday afternoon, the woman stated the she was departing for her home country.  However, upon arrival at the Cheddi  Jagan International Airport, it was discovered that her name was not listed n the flight. Rosemary had also reportedly misplaced her passport, resulting in her and Grumble returning to New Amsterdam. The travel document was subsequently found. Police sources said Rosemary had in her possession a large quantity of cash.
On Sunday evening, the duo reportedly watched a movie and Grumble fell asleep. When she awoke and inquired about her friend, it was then that she made the shocking discovery.
Police were summoned and her body was taken to the New Amsterdam Public Hospital. A post mortem examination was expected to conducted since Monday but police were awaiting members of the British High Commission’s arrival to identify the body.
Investigators hope that the post mortem will give a clearer insight into whether the woman committed suicide or she was killed.