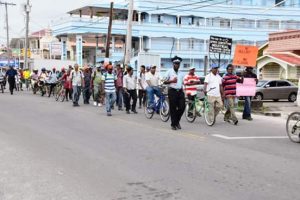 Scores of sugar workers on Tuesday lined the streets of Corriverton once again to protest Government’s decision to privatize the Skeldon Sugar Estate.

It was the first day for the year that work was scheduled for many of the workers as the estate had ceased grinding operations since last year due the unsafe conditions of the electricity co-generation plant used to the power the estate.

The crowd marched along the main access road from the Estate compound and then gathered at Republic Square where they were then addressed by fellow workers and union representatives.

President of the Guyana Agricultural Workers Union, Komal Chand noted that the sugar industry is one that is critical to the sustainability of the economy and cited the negative effects the privatization move will have on Guyana.

The union’s president stressed that the government has not been putting the needs of the people first and highlighted that government failed to make good on their promises to hopeful Guyanese of a better Guyana.

Chand highlighted that the closure of the Wales estate is a failure since all that has been done to replace the industry is the cultivation of about 200 acres of rice. Further, he urged the workers to continue the fight as he promised that the union will not allow the efforts of those who made the ultimate sacrifice to be wasted.

“We must continue to let our voices be heard. We must not allow this move to come to past. This estate, this sugar industry is our livelihood. Sugar has been apart of our culture for years so I urge you to not let it die.”

Meanwhile, General Secretary of the Union Seepaul Narine who opined that the estate does not need to be privatized addressed the issue of the Skeldon modernization plant being a failed investment.

Nairne argued that the Cogeneration plant made $9.5B last year deeming it a worthy investment.

Since Government’s announcement on plans its says will transform the sugar industry into a more sustainable venture, a nationwide strike action began resulting in thousands of sugar workers rallying together to voice their concerns on the move. This strike action led to production falling drastically as sugar workers retired their cane cutting equipment and dawn placards lining the streets hoping government might shift from their decision.