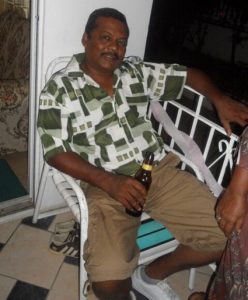 He is 55-year old Derek Ragnath, formerly of Mahaica Public Road near the police station.

A close relative said she was informed that the roof of Ragnath’s shop in Tortola caved in and killed him during the passage of the monster storm, Hurricane Irma.

Ragnath’s family members were not with him when disaster struck.

He was one of five persons in the British Virgin Islands who lost their lives to the rampaging hurricane.

Regarded as one of the most powerful and destructive storms to have struck the Caribbean, Hurricane Irma has also slammed several other Caribbean islands where Guyanese live. They include Anguilla, St. Martin, Antigua and Barbuda, and St Kitts and Nevis.

Dutch and French St. Martin have been virtually cut off from the rest of the world because telecommunication contact is extremely limited.

Guyana’s Honorary Consul in French Guiana, Ms. Travis Tracey-Lecant, has advised that all Guyanese who need information, in the aftermath of Hurricane Irma, on relatives who reside in French St. Martin should contact her as follows: [email protected] com with their full names, dates of birth, gender and address.