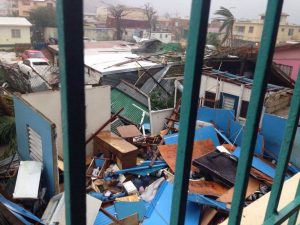 Thousands of Guyanese residing in the Leeward Caribbean Islands were Wednesday night grappling with the reality of massive devastation especially on the island of St Maarten where that country’s airport was earlier in the day virtually demolished by Hurricane Irma.

Reports are that one person died in French St. Martin, one in neighbouring St. Barts and one in Barbuda.

St. Maarten’s communication systems, including radio stations, have been off air, leaving that Dutch Caribbean island nation isolated from the rest of the world.  Usually well-updated news websites also did not publish new content for the day.

However, a Caribbean Hurricane Network message board was somewhat busy with several accounts of experiences. “I was here in SXM for Hurricane Luis and spent it in Orient Bay on the french side. Irma has far surpassed Luis. We were prepared and ready but it didnt really matter.I spent my hurricane at Divi Little Bay Resort as I am the restaurants manager on the property. Luckily no one was injured but it was and is a long arduous experience. We are currently almost 300 people stuck in the resort. The airport is closed and we need to feed these guests and provide shelter and water to them till they can get off the island,” said Elisa Cohen at 3:49 PM Wednesday.

“I can tell you that we live in a  very strong house and it felt like my house was going to explode. We definitely experienced the eye of Irma and very intense winds before and after the eye passed over us. We have every reason to believe we experienced the full force of a Cat 5 hurricane. We suffered  lot of damage but did not lose our roof. Many people did lose roofs and we are hearing reports of many businesses being totally destroyed,” Barbara Cannegieter said. 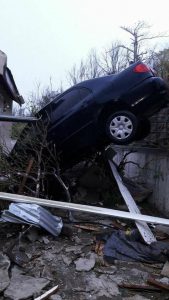 The Dutch and French Marines were assisting with relief efforts.

Earlier Wednesday, a woman who has been residing in Dutch St Maarten for several years now was forced to evacuated her rented home and seek refuge with friends at their home, parts of which began crumbling although that building was comparatively stronger.

Electricity, water and telephone services were yet to be turned again up to nightfall in the aftermath of  Irma whose strength peaked as much as 200 miles per hour as she swirled past the twin-island nation of Antigua and Barbuda where thousands of Guyanese live and work.

Prime Minister of Antigua and Barbuda, Gaston Brown confirmed that Antigua was spared massive destruction, but 90 percent of the houses on Barbuda were destroyed and one person died there. He plans to visit that island at his earliest opportunity.

Antigua’s VC Bird International Airport was due to reopen at 2 PM Wednesday to facilitate emergency relief and other operations.

He said recent cleaning of the drainage structures also resulted in no flooding in Antigua, the seat of the country’s administrative, political and economic capital.

Browne as well as credible sources on the island confirmed that soldiers  were on the streets clearing debris. Electricity , telephone and water company workers were also conducting island-wide inspections to ensure everything was intact before turning on utility services again.

Regarded as the most powerful hurricane in recent memory, Hurricane Irma also brushed St. Kitts and Nevis  before heading to the British Virgin Islands. The Federation and the BVI are also homes to many Guyanese. The Bahamas was also expected to be affected by the storm before heading to Florida, also the home to thousands more Guyanese and their American-born descendants.