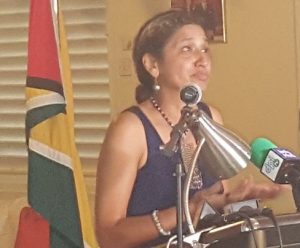 A British-funded three-year project to integrate Amerindian traditional knowledge into national environmental conservation policy and practice is likely to serve as a pilot project for the rest of the Guiana Shield while ensuring that Guyana achieves benchmarks of several international agreements.

The project is being undertaken by the Darwin Initiative, which was launched by Britain at the Rio Earth Summit in 1992, and is funded by the United Kingdom’s Department for Environment, Food and Rural Affairs, the Department for International Development and the Foreign Commonwealth Office.

Project Leader, Dr. Jay Mistry said the project, which started in July, would be hinged on international agreements for respecting and incorporating traditional knowledge in national laws while promoting the rights of Indigenous Peoples. Aiming to be participatory, transparent and evidence-based, the project seeks to preserve and promote biodiversity-based knowledge and at the same time alleviate poverty.

Mistry hoped that the findings and recommendations would find themselves in national laws and across the Guiana Shield:  Guyana, Suriname, French Guiana, Venezuela and Colombia. “Hopefully, we can put this process, or our findings into a national policy but we are also looking at how we can replicate some of the findings within the Guiana Shield Region…Hopefully, using Guyana as a real case study or as a best practice example of this process,” she said.

Ryan Benjamin, Senior Researcher at the North Rupununi District Development Board (NRDDB) believes that the project would help some of the 20 communities to understand some of the knowledge they have lost, currently enjoy and recover and preserve for future generations.

NRDDB Vice Chairman, Michael Williams emphasised the importance and relevance of the project to the North Rupununi especially preserving the wetlands in that area. He hoped that the Macushi people would receive assistance at a time when Guyana is embarking on the Reducing emissions from deforestation and forest degradation (REDD+) initiative to combat the effects of climate change. Williams expected the project would integrate traditional knowledge in a revised national policy. “We really look forward from today onwards to meet with the policymakers to see how best we can mesh this thing…our traditional knowledge and our expertise from the local level to the national policy we are looking forward to your cooperation so that we can move this country forward,” he added.

Faye Fredericks of the South Central Peoples Development Association added that “it is known that the information that the indigenous people have is the information that the world is needing right now and it is a pleasure for the Wapishan people of the South Rupununi to be working on such a project especially with the government that is so willing to take on Indigenous People’s views to work with policymakers.” She called for support from civil society to find ways of using traditional and scientific knowledge for Guyana’s development.

Executive Director of the Environmental Protection Agency, Kemraj Parsram pledged his entity’s support to the project. “Indeed, the EPA eagerly looks forward to the  policies to be developed especially those with which its mandate is closely aligned,” he added.

Commissioner of the Protected Areas Commission, Denise Fraser said the Darwin Initiative project comes at a time when Guyana is implementing the management plans for the protected areas, strive to strengthen the relationship between indigenous communities and the Commission, and promote sustainable use of Guyana’s natural resources. “We welcome this project which is of great interest to us and we look forward to a close and fruitful collaboration and to being able to use the information, practices from the work that comes out of this project, to be able to better manage our protected areas and the valuable biodiversity found therein,” she said.

Forty-six communities from six of nine Indigenous tribes live around the Protected Areas and depend on natural resources found there.