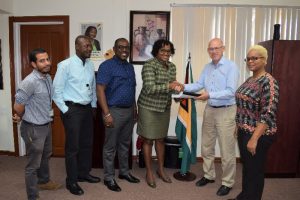 Government on Wednesday announced that the location for the new Demerara Harbour Bridge will be located at Houston-Versailles, and that lands would have to be acquired.

The Feasibility Study and Design for the new Demerara River Bridge has successfully been completed, and a copy was this afternoon presented to Minister within the Ministry of Public Infrastructure, Annette Ferguson.

“In fact, Mr. Adams added, the project team met with the Land and Surveys Department today for advice on surveying and the acquisition of land,” the Ministry of Public Infrastructure said in a statement.

Mr. Thompson added that challenges, such as land acquisition, will have to be faced but he stressed that the team is up to the challenge.

Government said the bridge should be a low-level one with a movable part and three-lanes. “This structure, it said, provided the most socio-economic benefits for Guyana and led to the lowest urban environmental impact,” the Public Infrastructure Ministry added.

The Feasibility Study and Design for the new Demerara River Bridge has successfully been completed, and a copy was Wednesday afternoon presented to Minister within the Ministry of Public Infrastructure, Annette Ferguson.

During the document’s handing over, a rundown on its main conclusions were highlighted. From the feasibility study it was determined that the proposed location of Houston-Versailles was the most ideal.

The Ministry of Public Infrastructure added that it was recommended that the promotion of alternative transportation routes should be encouraged to lend to the longevity of the new bridge.

The completion of the feasibility study leads the way for the next stage, the pre-qualification of contractors for the construction of the bridge, government said.

This process has already begun and will conclude on October 17.

Meanwhile, both Mr. Adams of DHBC and Mr. Thompson of MPI noted the preparations that were undertaken during the feasibility stage to ensure the successful completion of key components.

Mr. Thompson noted that during the preparation of the feasibility study, all possible stakeholders, including those from the private and public sectors and neighbourhood and regional democratic councils, were consulted. InThe team also met with the Environmental Protection Agency Wednesday on proceeding with the necessary environmental study.

“All in all, we’re confident that once we work together and everyone puts their shoulder to the wheel, we can get this project moving along smoothly,” Mr. Adams was quoted as saying.

Upon receipt of the report, Minister Ferguson thanked the team for its dedication to the project and extended special thanks to Mr. Mol for satisfactorily delivering the report.

In response, Mr. Mol expressed his honour and gratitude for the support received from the Guyanese team and emphasised that his counterparts had enabled the entire team to work as one effective unit.