One bandit shot dead, another injured after trailing businesswomen from airport 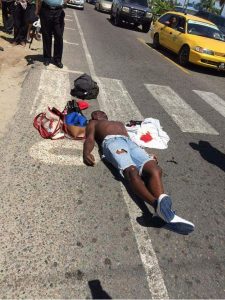 Head of the Guyana Police Force’s Criminal Investigations Department, Senior Superintendent Wendell Blanhum said preliminarily investigators were told a businesswoman and her bodyguard had moments earlier left a business enterprise when they came under attack.

Blanhum said the bodyguard opened fire, killing one of the men.

The Guyana Police Force later said in a statement that “a 42 year old Interior Flight Services Supervisor and her Security Escort who was armed with a licensed handgun, went to Ogle Airport in a motor car, driven by the supervisor and collected several parcels.

As they were returning to Georgetown via the Railway Embankment, in the vicinity of the Giftland Mall Access Road, a dark coloured motor car suddenly blocked their path and immediately two males, exited the vehicle, brandishing firearms and pounced on them.

Hospital sources said his accomplice was shot and injured. An unidentified white car dropped him off at the Georgetown Hospital gate and he walked in.

Other reliable sources said two women, who were escorted from the Eugene F. Correia ‘Ogle’ Airport with gold and cash, were trailed by the men.

The sources said they stopped at the bus shed on the Railway Embankment Road and Giftland Mall Road to purchase plantain chips when the bandits attempted to rob them.

The bodyguard, who is attached to KGM Security Service, opened fire and struck the suspected bandits.

One was killed on the spot and the other fled on foot and later arrived at the Georgetown Hospital.