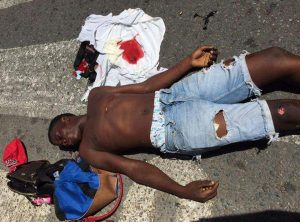 The bandit, who was shot dead while attempting to rob two businesswomen Tuesday morning, has been identified as a former member of the Guyana Prison Service, police said.

He is Troydon Munroe.  The 24-year old man  was dismissed from the Guyana Prison Service in March, 2017 for breaches of the regulations and he was described as a delinquent.

One .32 pistol and a number of matching rounds as well as two ladies handbags and mailbags containing cash, gold and other items were found in Munroe’s possession.

Munroe was identified by his aunt, police said.

Fearing that their investigations and prosecution could be compromised, the Guyana Police Force declined to disclose the identity of a Munroe’s accomplice, who was dropped off by a white car on New Market Street, and walked into the Georgetown Public Hospital Corporation for medical attention.

The two men were shot at by a private bodyguard who was accompanying two businessmen from the Eugene F. Correia ‘Ogle’ International Airport with cash and gold.

Investigators were told that the men attempted to rob the women when they stopped at Railway Embankment Road and Giftland Mall Road to purchase plantain chips. Munroe was shot dead and his accomplice fled on foot.