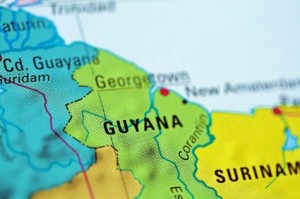 Almost one year after Barama Company Limited (BCL) gave up its 1.6 million hectare forest concession, Guyana on Saturday announced that two lots totaling 800,000 hectares of that area have been awarded to R.L. Sukhram and Sons Sawmill, and Rong-An Inc.

The Ministry of Natural Resources said the Guyana Forestry Commission (GFC) said over the next three years- July 2017 to July 2020-, the State Forest Exploratory Permits (SFEP) would allow the companies to conduct an “assessment prior to commercial full scale harvesting.”

“It is expected that the awarding of the two parcels will result in benefits to the forestry sector over the course of the full operationalizing of the utilization/harvesting plan for the concession,” the ministry said.

Government says the companies are expected to invest a total of US$9.5 by 2020, generate 524 new jobs when the operations are at full scale, increase of national production level by at least 189,000 m3 annually, hike export revenue by at least US$7 million, and increase harvesting of Lesser Used Species from the current 10-15 percent to at least 25 percent of total production.

Government says the concession areas both have a high occurrence of a number of high-value commercial timber species, including Baromalli, Greenheart, Purpleheart, Mora, Wallaba, Crabwood and Kabukalli, among others.

The former Barama Company Limited concession into four parcels, each of approximately 400,000 hectares.

Parcels 1 and 2 were opened for Expressions of Interest (EOIs) for the period ending February 10, 2017. These were advertised in the local media as well as in the international publications ‘Development Business’ and ‘The Economist’ and placed on several websites.

Guyanese authorities said 10 submissions were made at this deadline, some for both parcels while others were for one or the other. These firms were invited to submit SFEP applications, pay the non-refundable fee, and complete a Business Plan Summary by April 28, 2017.

At the deadline of April 28, 2017, five applications were received from the following entities:

The Ministry said following the receipt of applications, the Technical Sub Committee of the GFC Board of Directors conducted a full review of each application. The review of the Technical Sub Committee concluded that Parcel 1 should be issued to Rong-An Inc., and for Parcel 2 to be issued to R.L. Sukhram and Sons Sawmill for a three-year period commencing July 2017 to July 2020.

This decision was approved by the full Board and has been implemented by the GFC, the Ministry of Natural Resources said.

After investing GYD$45 billion during its 25-year presence in Guyana, Barama in October, 2016 relinquished its forest concession after failing to reach agreement with government on renewing its Investment and Forest Concession Agreements.  The company had also cited unspecified discouraging economic conditions that had led it to conclude that its operations in Guyana would have been no longer viable.