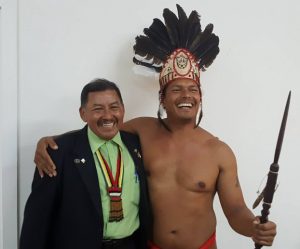 Minister of Indigenous Peoples Affairs, Sydney Allicock on Friday accused the executive of the National Toshaos Council (NTC) of politicking by refusing to cooperate fully with government, a position that drew a string denial from NTC Vice Chairman, Lenox Shuman.

He said the NTC top brass was engaged in political activities aimed at bolstering the chances of the opposition at the 2020 general and regional elections. Allicock said while President David Granger has been committing to support the Indigenous Peoples, the leadership has been spouting “disrespectful remarks” in the media and then returning to discuss.

“…because of political ambitions. They are already gearing up for the next election and they are being courted- national elections- this is exactly what is happening,” Allicock told reporters.

If the political issue is not resolved, the Indigenous Peoples Minister sounded a very cautious note about A Partnership for National  Unity+ Alliance For Change (APNU+AFC) receiving overwhelming support at the next general and regional elections. “Well, we have to wait and see. I don’t want to pronounce on that now We’ll wait and see. It depends on how much we love Guyana, how much we love one another, how much confidence we have that we could manage our own affairs with the support by this government,” he said.

However, the NTC Vice President Shuman denied that the NTC’s Executive was politically motivated saying those remarks were “slightly unfounded and baseless”.  “There is no political agenda. The NTC cannot be a political body because when politics gets into Indigenous communities, it divides the communities,” he said.  Shuman recalled saying that the party, which aligns itself with the Indigenous Peoples’ issues,  that would win the 2020 general elections. “If the NTC presents issues, then it should be the government’s responsibility to say ‘ Indigenous Peoples, we have identified those issues and we are going to work on them’ instead of simply taking that as a threat,” he said.

Shuman reasoned that APNU+AFC and the opposition People’s Progressive Party fear unity among the Indigenous Peoples because “we pose an imminent threat. At the end of the day, it’s the Indigenous vote that determines who sits in office and that is the reality.”

While the NTC is legally independent, the NTC Chairman said his executive was unsuccessful in persuading government to invite Opposition parliamentarians to participate in the discussions at the 5th NTC Conference. “That idea from the outset was shot down. What they said was that when they (PPP) were in power, they never gave the opposition a chance to come to the conference. Now we are in power, they are not going to have a chance,” he said.

Shuman noted that government used its financing leverage to determine who should attend “so if we cannot have financial independence, the NTC cannot have its own independence.”

Referring to the NTC’s concern that its annual budgets were being cut annually, Vice President Allicock could not immediately give a reason for the slash in the proposed budgets, but charged that the high-level decision-making body of Toshaos instead used the funds to campaign against the Lands Commission of Inquiry (COI) now underway.

“Instead of being aware and conscious, as leaders, to stretch the dollar, they prefer to sit and complain. To go and spread bad news, they were able to use that money and go and talking about the COI,” the Minister of Indigenous Peoples Affairs said.

The NTC said the monies that government has been repeatedly slashing its proposed budgets. In 2015, the NTC, after considering its mandate under Section 41 of the Amerindian Act, submitted a budget for 2016 for GYD $38 million. The NTC was given a GYD $12 million. In 2016, the NTC once again submitted a budget for 2017 for GYD $48 million and was given GYD$16 million. “This year, realizing continued lack of finances to execute its mandate, the NTC Submitted a budget for $87 million. The NTC was subsequently told that any budget request should not in principle, exceed a 10 percent increase thus we are expecting little to no change,” the NTC added.

But, Allicock said the Toshaos have to find a way to use the scarce cash. “If you are willing to work, you stretch the dollar with what you have. As leaders, you got to do that. You just can’t say the money is not enough and you are going to sit down,” he said. Asked why the budgets were being cut, he said it might be that officials could not have provided strong enough justifications are government simply did not have sufficient cash.

On the issue of the Toshaos feeling disrespected because they were not consulted in drafting the plan, including the scheduling of interactions with ministers, Allicock recalled asking the Principal Regional Development Officer three weeks before the 2017 NTC Conference for the programme but was only told they were working on it. He said that would have allowed the ministers to better prepare for responding to questions at the Conference. He said only four or five Toshaos, who are closer to Georgetown, largely dominate the Conferences unlike those who are brought from remote hinterland communities at great expense to the State.

Noting that the NTC has no legal obligation to consult with the Ministry of Indigenous Peoples Affairs, Shuman explained that the Council’s executive could not have provided an agenda before it was adopted by the executive. He said the agenda was produced to achieve a set of objectives.

The one-week NTC Conference ends on Friday. President David Granger, though listed on a programme to attend the conclusion of the confab, was not due to attend the event being held at the Cyril Potter College of Education, Turkeyen.