Some GPL generators convertible for natural gas use 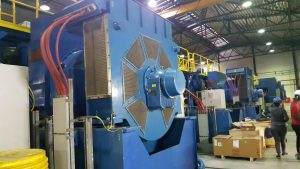 Four of the Heavy Fuel Oil (HFO)-powered generators at the northern section of the Kingston Power Plant that can be converted to use natural gas.

Several of Guyana Power and Light’s (GPL) existing generators can be converted to use natural gas that ExxonMobil will be extracting during commercial oil production in another two years, top officials of the maintenance company said.

The state-owned Power Producers and Distributors Incorporated (PPDI) says it will be taking into consideration public pronouncements by government that it will be using natural gas to fuel GPL’s generators in drafting its Strategic Plan.

PPDI Chief Executive Officer, Arron Fraser said four years ago, equipment and labour to convert one generator from using Heavy Fuel Oil (HFO) to natural gas had been estimated to cost 300,000 Euros. The latest cost is not available.

Officials said several of the sets at Kingston Power Station and all of those at the Vreed-en-Hoop Power Station can be converted to use natural gas. He said the strategic plan, including the prospect of using natural gas, would be dispatched to David Patterson who holds ministerial responsibility for energy.

“The use of natural gas is nothing new. In the past, you would have had to import it but now that we are developing our own gas…which would impact on the cost… so we are responding to the announced policy and trying to position ourselves…This is all part of our contribution to ensure that local expertise and local companies are in a position to benefit from the oil industry,” PPDI Board Chairman, Mark Bender said. 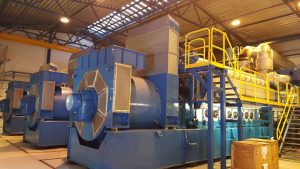 The three HFO-powered generators at the Vreed-en-Hoop power station being operated and maintained by Power Producers and Distributors Inc. These generators can also be converted to use natural gas.

Contrary to ExxonMobil’s position that it will not be feasible to commercially feasible to extract and sell natural gas, the Guyana government says it wants the fuel to power GPL’s generators.

PPDI has taken over responsibility for maintenance of the generating sets at Garden of Eden, East Bank Demerara; Kingston, Georgetown and Vreed-en-Hoop, West Bank Demerara from the Finland-headquartered company, Wartsila. Wartsila’s experts are still hired periodically by PPDI to conduct maintenance of the high-tech computerised generating systems

The operations and maintenance company hopes to rake in an estimated profit of US$2 million this year based on, among other things, the sale of electricity at 16.87 US cents per megawatt hour. Latest figures show that so far for 2017, the company has generated 375,285 megawatt hours compared to 381,347 megawatt hours for the same period last year.

“Our generation is tied to the demand of the grid so though it might have generated less this year, our output is strictly mandated by what GPL requires which is what essentially the customer requires,” Fraser said. The company is also registering 93.43 percent plant availability compared to 92.00 percent for the same period in 2017.

The PPDI’s CEO noted that the locally-owned company is already saving Guyana a lot of money. He cited the example under the previous arrangement with Wartsila of bringing a Field Service Superintendent from that company costed US$45,000 per maintenance. PPDI has an average of 11 maintenance issues per year.