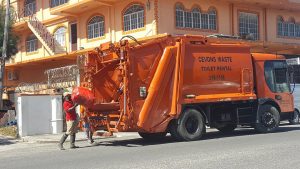 Cevons Waste Management on Thursday announced that it would be laying off 45 workers from next month because City Hall is yet to pay any of its multi-million dollar debt.

“It is,therefore, with considerable regret that we announce that with effect September 1 Cevons Waste Management must discontinue the employment of 45 employees.

We deeply regret this eventuality and commit ourselves to restoring the jobs of the displaced persons as soon as the situation normalizes,” the company said.

Cevons did not respond to a question about whether the employees would be entitled to severance pay.

Cevons said Puran Brothers Waste Disposal has also run out of patience awaiting word from the City’s administration about the settling of a more than GYD$300 million debt owing since 2015.

Kalesh Puran of Puran Brothers said his company was also considering sending home 45 workers from the various departments. “We will have our management meeting this weekend and decide,” he told Demerara Waves Online News.  He said a number of the workers would know their fate when they return from rotating annual vacation leave.

Expressing concern that the City Administration has not paid even a small amount of the GYD$127 million owing to his company, Puran said all the options available including bank overdrafts and re-financing have been exhausted.

“We are hoping that something can be brokered between us and them and make some payments to us. We are willing to work back but we cannot continue without payment. We have to get payment because we have a lot of loans,” he said.

Town Clerk,  Royston King earlier this week announced that businesses qould have to pay for the collection of their waste.

He has also said that provate waste disposal companies would have to pay haulage for moving garbage through the City.