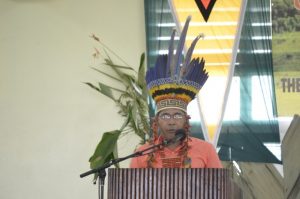 The Chairman of the National Toshaos Council (NTC), Joel Fredericks on Monday slammed the David Granger-led administration for shoddy treatment of Amerindians, prompting government to question whether his views reflected those of the entire council.

Addressing the opening of the 2017 National Toshaos Council Conference, Fredericks expressed grave concern that Amerindians were being discriminated to the extent of being “treated as third class citizens in this land where we are First Peoples of this land.”

Minister of Indigenous Peoples, Sydney Allicock said he hoped to hear about development plans from the Toshaos and queried whether the Amerindian village leaders contributed to the NTC Chairman’s speech. “I am not certain if we ask what contribution you made to the presentation of the Chairman; if your voice is part of that,” the minister said.

Allicock suggested that the NTC leadership is fragmented and somewhat weak, while he was confident in the leadership of the villages and communities. “I detect the need for a stronger, more unified approach to decision-making at the level of the executive. I urge that we recognise the need for deepening the process of consultation on some critical issues between that body and the wider leadership of the NTC- this means you. Have you been consulted on these things? Do you know what is happening when the twenty executive members make a decision?,” said Allicock, an ex-officio NTC member. The Minister said there are a lot of developments and successes in villages that should be highlighted instead of focusing on doom, gloom and negatives. 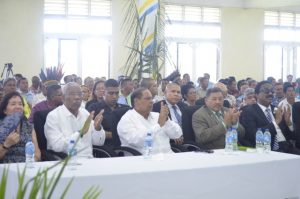 Reacting to Minister Allicock’s views, NTC Deputy Chairman, Lenox Shuman endorsed them and  said “we we look at good governance, we cannot only blame the administration that sits; we have to look back at the history of Guyana and we have to look at ourselves.”

Noting that the law provides of self-governance by structures such as the NTC,  Fredericks discouraged anyone from openly attacking the leadership of that decision-making body of Village Chiefs in the National  Assembly. In apparent reference to Junior Minister of Social Protection, Keith Scott’s description of the Amerindians desire for land rights issues to be settled as one of “avarice” during parliamentary debate on an opposition-sponsored motion to scrap the Land Rights Commission of Inquiry, Fredericks lamented that none of the lawmakers took action.

“Ministers of the government insulting the Indigenous Peoples and calling them greedy, also in Parliament without any consequence. There was not one politician that got up and walked out in protest- neither the administration nor even the opposition. We have taken note,” he said.

The NTC Chairman said there is political interference in Amerindian communities such as the establishment of towns in Amerindian areas such as Lethem, Bartica and Mahdia as well as the execution of programmes and administrative policies. “We need to have consultation, Mr. President; all of these without the Indigenous participation through FPIC (Free Prior and Informed Consent). This is troubling and needs redress mechanism,” he said.

Fredericks singled out an unnamed member working for the government “openly attacking the Indigenous Peoples identity, integrity and history.” “We advise caution as such uttering drives a deep wedge in a nation.”

He said the absence of the constitutionally required Indigenous Peoples Commission and Human Rights Commission exposed the NTC to “blows” over its strong objections to the Commission of Inquiry on Lands.

The NTC Chairman issued an impassioned appeal for all stakeholders to work together to resolve the several issues including land rights and the Amerindian Act “Let us work together instead of back and forth, pulling and tugging….We need to attack the issues and change our mindset of attacking personalities,” he said. He told the President that we are only here to serve the people for a time but they should be served in a manner to ensure there is a good legacy.

The NTC thanked government for a plot of land on which its headquarters would be constructed. The land was promised by the President in his address at the 2016 NTC Conference.