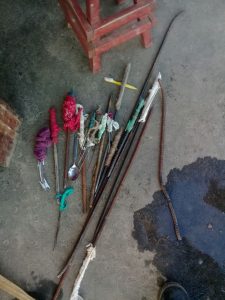 The improvised weapons that were handed over to the prison authorities Saturday morning.

Hours after allegedly attempting to kill a fellow prisoner because he was suspected of being an informant, inmats of the Lusignan Prison Saturday morning handed over several improvised weapons and apologised for their behaviour, Prisons Director Gladwin Samuels said.

He said prison staff, with the support of police and soldiers, reported for duty at the new holding area at the East Coast Demerara jail where they were greeted by prisoners from the three holding areas and were offered apologies for their actions last (Friday) night.

“They thanked the officers for not directing shots at them last night even though they misbehaved,” Samuels said.

The Director of Prisons said following the apology, they handed over 33 improvised weapons made from various materials that were used to construct the holding area.

“In our continuous efforts to maintain security at the Prisons, we remain vigilant and remind prisoners not to damage the property of the government,” he said.

Eighteen inmates of the Lusignan Prison were injured by razor wire as they jumped from one block to another in an effort to kill an inmate they suspected to be an informant for the prison authorities. Several of them were treated by medical personnel at the Lusignan Prison while others were taken to the Georgetown Public Hospital.

That prisoner was not hurt and he was relocated to the main prison building.