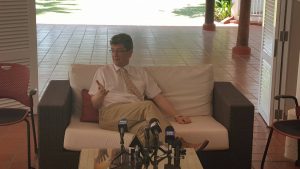 British High Commissioner to Guyana, Greg Quinn briefing the media at his residence.

Britain has signaled its willingness to help Guyana craft a plan of action to use massive oil revenues that are expected to flow from 2020 and has suggested that the more decade-old National Development Strategy (NDS) be used a skeleton, the top British envoy here said Thursday.

British High Commissioner, Greg Quinn said “there is interest in  the UK (United Kingdom) to look at helping develop the strategy” but it is for the Guyana government to  decide on the basis for developing that plan. “I  know it is something which they are considering,” he said.

Quinn in addition to progress being made to pass legislation for the Petroleum Commission, Local Content, and the Sovereign Wealth Fund, Guyana could use the 2005 National Development Strategy as the basis for shaping a new framework on how best to spend oil revenues.

“We have made clear that there is a need to look at the overall strategy and that the NDS, which is something that has existed in the past, can maybe provide the basis or skeleton on which to move forward,” said Quinn,  who qualified in the area of International Politics and International History.

United States (US) oil giant, ExxonMobil, has said Guyana would begin earning from the very first barrel of oil when it is pumped in 2020 from the Liza field, said to contain almost 500 million barrels of recoverable oil.

Asked what has been the reaction to Britain’s suggestion, Quinn said “there is no question and everybody that there needs to be a proper plan for spending the money.”

Finance Minister, Winston Jordan is already on record as saying that one of the challenges that Guyana will face is its ability to spend the huge amounts of oil cash on massive infrastructural projects due to insufficient capacity of skilled persons.