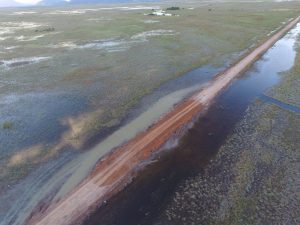 The repaired section of the Hunt Oil road, a major thoroughfare that links Lethem with other parts of Guyana including Linden and Georgetown.

Vehicular traffic to and from Lethem resumed on Friday following the completion of emergency works on the Hunt Oil stretch of road that was washed away for several weeks, the Ministry of Public Infrastructure said Monday.

Prior to the repairs, all filling stations in the southern Guyanese town had run out of gasoline because tankers had been unable to cross that section of then badly deteriorated road.

“Following reports of deterioration of the stretch due to prolonged rainfall, the Ministry of Public Infrastructure sprang into action to have the situation remedied as quickly as possible. The efforts even saw the hauling of laterite from more than 20 kilometres away to ensure the sourcing of quality material,” the ministry said in a statement.

The contractor, JR Ranch Inc. reportedly stated that sections at the side of the roadway, before the particularly bad areas, were first filled to create turnaround spots for the trucks due to the road’s narrowness. The company said three areas along the stretch were also filled and compacted. Furthermore, an excavator was used to form two cofferdams at the sides of the eroded spot in an effort to remove all accumulated slush and water prior to filling and compaction. 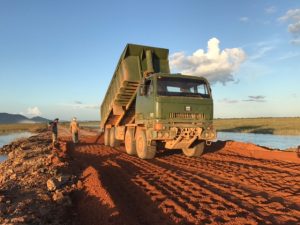 The Public Infrastructure Ministry said it would be teaming up with the contractor to monitor the stretch of road to ensure that there is no further need for filling and compaction and that the issue does not reoccur.

Meanwhile, the ministry said a maintenance programme under the Ministry’s Hinterland Department will soon be coming on-stream to rehabilitate a number of corridors, including those from Linden-Lethem; Ituni-Kwakwani; and Mabura-Mahdia.

That programme is slated to last for one year, government said.

The Chairman of Region Nine (Upper Takatu- Upper Essequibo), Bryan Allicock has said that government has taken too long to repair the Hunt Oil stretch of road, resulting in greater deterioration and higher repair cost.

Allicock has said that government has effectively turned down budgetary requests for Region Nine to purchase its own road repair and maintenance equipment but little has been done.