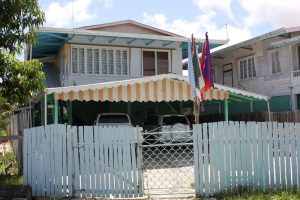 The house which was invaded by armed bandits late Saturday night.

A Corentyne family are counting their lucky stars after heavily armed bandits invaded their home at Lot 179 No. 69 Village, Corentyne on Saturday last and carted off with over GYD$1.7 million in cash and gold jewellery.

Twenty-seven year-old Satchin Ramrattan, his pregnant wife, 26-year-old Vidya Gopaul and their four-year-old son managed to escape the ordeal with merely cuts and bruises after jumping to safety.

Ramrattan, who owns a fishing boat, is regarded as wealthy.

Information received revealed that around 11:20 Saturday night? the family, who retired to bed hours before, were awoken by loud banging sounds coming from a window.

In a bid to ensure survival, the man quickly gathered his son and his wife, who is due to give birth in two weeks, and jumped out of their bedroom window on  to a zinc shed where they quickly retreated to a neighbour’s yard and contacted law enforcement authorities.

Moments later, they heard loud explosions said to be gunshots s the men ransacked the entire home and made good their escape.

Neighbors disclosed that they saw seven shadowy figures armed with long guns in the yard moments before.

B’ Division Commander, Assistant Police Commissioner Paul Williams stated that they have arrested a taxi driver and five other men in connection with the robbery.

According to Williams, the man was found parked outside of the premises at the time of the robbery. When asked, he stated that he was ‘called for a taxi work’ at the home. 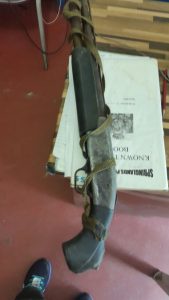 The shotgun police said they found at the home of a suspect in an armed robbery at Corentyne.

search was carried out on his person and police discovered a quantity of marijuana in his possession. A subsequent search at his home uncovered an unlicensed shot gun with two spent shells and one live round.