Timehri prisoner, who was shot dead, did not attempt to escape- sources 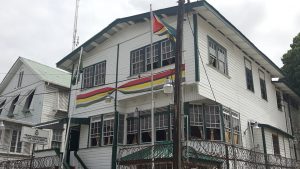 The headquarters of the Guyana Prison Service, Brickdam, Georgetown.

The murder accused prisoner, who was shot dead last Friday at the Timehri Prison, did not attempt to escape, in stark contradiction to information provided by  government on the day of the incident.

Well-placed sources told Demerara Waves Online News that there is no evidence to support the public official position that 26-year old, Winston “Town Man” Hinds had apparently sought to escape from the penal institution located at East Bank Demerara.

Highly placed sources said Hinds and another prisoner had attacked a third prisoner and began beating him.

In fact, sources said Hinds, who was armed, refused to obey orders more than once to cease attacking the prisoner.

The most senior officer at the time, according to sources, then opened fire, hitting Hinds who was rushed to the Diamond Hospital where he was pronounced dead.

However, on the evening of the incident, government gave a different account which in part read. “Clear and repeated orders were issued for Hinds to desist but he refused in every instance and continued running. Prison officers were left with no option than to curtail his escape bid.

This necessitated the use of live rounds as a last resort after every other option had failed. Hinds was struck on the body by a single round and was immediately taken to the East Bank Demerara Hospital Complex at Diamond where he was pronounced dead on arrival,” according to the statement issued through government’s Department of Information.

Last month was marred by the worst prison unrest in Guyana’s history, first with the burning of the Georgetown Prison and subsequent escape of 13 inmates through a muddy hole from the swampy Lusignan holding area.

After that escape, the security forces apparently took no chance and injured 16 prisoners with pellets and rubber bullets at the asphalted and roofed holding area at Lusignan after they were seen ganging up and disobeyed orders to break up.