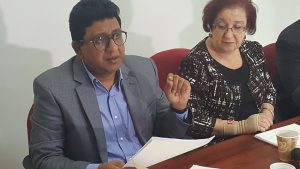 The opposition People’s Progressive Party (PPP) attempted to downplay that at least two relatives of top party officials were among those granted radio and television licences by the Bharrat Jagdeo administration.

“Clearly, from the names we read out they are not PPP, nor are they relatives of Jagdeo whatsoever,” Opposition Chief Whip, Gail Teixeira told a news conference. “We are in this nonsensical argument which has been fanned by the APNU+AFC that these are the relatives of Jagdeo. It is totally incorrect. there is nothing to substantiate it,” she added.

When Teixeira was asked moments later whether Kamini Persaud is  Jagdeo’s niece and Vishok Persaud is the son of former PPP member, Reepu Daman Persaud, she said “we never said there were no relatives.”

She added that when she read the list in the House during debate on the amendment to the Broadcasting Act, the government parliamentarians said “they were all relatives”. Opposition Shadow Attorney General and Minister of Legal Affairs, Anil Nandlall then interjected, saying “yes, Vishok is Reepu Daman Persaud’s son. Does that disqualify him from getting a licence?” He said government was charging that “all” the licencees were related to Jagdeo.

Teixeira noted that Junior Finance Minister, Jaipaul Sharma is the son of Chandra Narine Sharma owner of CNS TV6 and Dr. Noel Blackman was licensed to operate HBTV Channel Nine while he was a Health Minister in the late 1980s.

“The issue of conflict of interest is not a question if we are related to. It’s whether the system works according to the way it is supposed to,” she said in response to questions by Demerara Waves Online News. “Unless you have proof that the Advisory Committee on Broadcasting recommended to the President or the Prime Minister to issue licences to the following people and the President or the Prime Minister refused to do that, then you have a case. You cannot have a case when regulatory bodies by law make recommendations and they are being followed through,” she added.

Kamini , who is also former government minister Robert Persaud’s wife, was a director for IRadio which has since been sold to Anss McAl and re-branded Mix 90.1 . Vishok is the owner of E-Networks cable television service.

Teixeira said during Friday’s debate on amendments to the Broadcasting Act, Minister of State, Joseph Harmon read out selected companies owned by Indo-Guyanese and left out the others. There are 19 television stations and 11 radio stations.

Nandlall questioned the APNU+AFC’s fuss about entities such as  the PPP-owned New Guyana Company receiving a radio licence for Freedom Radio and said there was nothing stooping the opposition from receiving a licence. “Why has the PNC (People’s National Congress) not applied for a radio station all the years from 2011 or the AFC? But they don’t want to do that because they have gullible people listening to the propaganda,” he said. Nandlall said none of the several lawyers could have challenged the issuance of the licences but opted to score political points.

Teixeira said she read the entire list of radio and television station licensees in the House on Friday at which time Prime Minister, Moses Nagamootoo said the then PPP administration under Jagdeo had given licences to his relatives.

During debate on the amendment, government singled out IRadio, Freedom Radio and E-Networks as the radio and TV stations that had been granted licences to broadcast on several frequencies in almost all densely populated areas of the coast, Bartica and Linden.

PPP front-bencher, Clement Rohee accused the David Granger-led administration of amending the Broadcasting Act 2011 to pave the way for taking away the licences that were granted by Jagdeo.

In response, Minister of State, Joseph Harmon said changes to the principal act were not about taking away anything but said the allocation of frequencies to those entities amounted to a monopoly that the amendments would correct. “This Bill is going to correct it. The people of this country asked us to act; the people of this country require us to act as a government and we will act and so Mr.Chairman this is not a matter of taking away anything,” he said.

Guyana Publications Inc; publisher of the privately-owned Stabroek News newspaper, that had applied for a radio licence decades ago did not accept an invitation to re-apply after the passage of the Broadcasting Act in 2011 because it was dissatisfied with the manner that Jagdeo had handed out radio licences before the passage of that law.

“We did not re-apply on the principle that these licenses had already been handed out to all and sundry in a process that we didn’t think was fair… so it would be validating something that was badly done if we then went ahead and reapply,” Stabroek News’ Editor-in-Chief, Anand Persaud told Demerara Waves Online News.

He said the Board of Directors of Guyana Publications Inc. would have to decide whether to re-apply now that the new board of the Guyana National Broadcasting Authority (GNBA) is seeking to streamline its operations.

The amended Broadcasting Act now requires all previous applicants to re-apply and fees already paid would be added to the new ones.