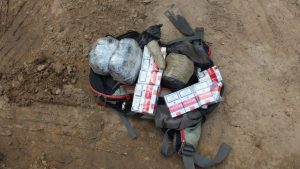 The bag containing packets of suspected marijuana and cigarettes that was being smuggled into the Lusignan Prison.

Samuels said the workers went there to collect the portable toilets from the Lusignan Prison building and the asphalted holding area when a search was ordered.

A haversack containing what is suspected to be marijuana and cigarettes was found in the possession of one of the workers.

The Cevon’s Waste Disposal Truck has since been seized by authorities and the suspects handed over to police.

The Head of  Cevon’s Waste Disposal Services, Morse Archer expressed shock at the involvement of his staff members and said they would be fired immediately. “This is really, really embarrassing. It’s far from what we stand for. This something we would not have wanted to be associated with our image,” Archer told Demerara Waves Online News.

The Guyana  Police Force later said in a statement that at about 10:45hrs today, police acting on information conducted a search of a vehicle owned by a Waste Disposal Service, which shortly before entered the “Old Compound” of the Lusignan Prison and found therein a haversack containing in excess of 860 grams of cannabis and two cartons of cigarettes.

The driver and two porters, one being a female, were searched and 24 grams of cannabis were found in the driver’s pants pocket.

The driver, 25 years old, of Middle Walk, Buxton, ECD along with the porters; a 26 year old male from Russel Street, Charlestown, Georgetown and the 32 year old female of ‘C’ Field Reserve, Sophia, are in custody assisting with the investigation.

The Director of Prisons expressed disgust that prison wardens continue to collude with other persons in breaching the security of the country’s jails.

Over the years, prohibited items including improvised weapons, cellular phones, marijuana and cigarettes, have been found at the prisons.