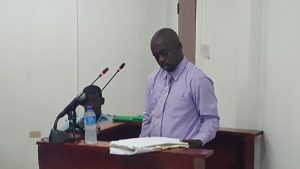 Detective Laundry reading a statement that Attorney-at-Law for the Guyana Police Force, Ian Chang showed him.

The man, who accused Nizam Khan, of offering him GYD$7 million to kill President David Granger, might have framed the East Bank Demerara businessman if the testimony of his former landlord is anything to go by.

Attorney-at-Law for the Guyana Police Force, Ian Chang on Wednesday led evidence by Detective Laundry to show the Commission of Inquiry that the accuser, Andriff Guillard, had a hidden motive to frame his friend, Khan, with the assassination plot.

Chang asked Laundry to read a statement he had taken as late as July 19, 2017 from Luanna Walker on which she recalls Guillard telling her that Nizam Khan had helped the owner of a property at which he had been operating a taxi service to win a case and so he would have to remove. Walker says Guillard, who lives nearby, also said Nizam Khan would be would be paying to get a woman out of jail to have him removed because he (Nizam) wanted to buy the property from that woman.

Walker indicated that based on the conversation Guillard wanted to retaliate at Khan for engineering his removal from the property by concocting an allegation that would “lost him (Andriff) away in jail” and that everyone would believe because the two of them are friends.

“I will go and say that he paying me to kill Granger. I then told Andriff  not to do that if it is not Nizam helped him with his business but… that ,man wicked, he want to ‘deh’ with my wife. I then told Andriff not to do that because he knows the man never did that and if he is ungrateful… and if the man is ungrateful…and if the man wrong him he will get his reward; don’t go and do that,” states the woman in the six-page statement.

She said the man once rented a barber station at her premises and she had had cause to report him to the police several times because he had often paid his rent very late.

With regards to the statement being provided to the police on July 19, 2017; the woman said she was prompted by a media report. “I cannot recall which day it was but shortly after I saw the report in the media and Facebook and said ‘there is a God and he don’t sleep’ and that was my comment,” she said.

Walker said she decided to speak out after hearing about the Commission of Inquiry and consulting her lawyer about what she should have done.

The woman said Guillard’s child-mother, shortly after he had beaten her, had told her that he was planning to do something to Nizam Khan but she refrained from discussing the matter with  her because they would often be back together after major disagreements.

The alleged plot was hatched in June 2015, but it was not until March 29, 2017 that Guillard reported the matter to the police, sparking off a confrontation between himself and Khan the same day of the complaint.

The Police Legal Adviser, Retired Justice of Appeal, Claudette Singh has since opined that the evidence was  weak and that investigations should continue.

Khan earlier this week denied offering Guillard money to kill President Granger. However, in the past Guillard had borrowed monies but never repaid him in full.

Lawyers for the Guyana Police Force and the Police Commissioner, Seelall Persaud have sought to discredit the allegation and prove that investigators had investigated the report sufficiently, instead of being tardy and unprofessional.