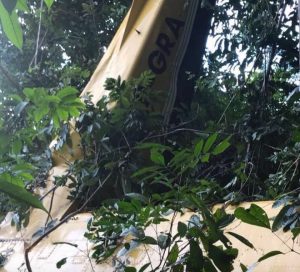 The wreckage of the Roraima Airways-owned Britten-Norman Islander plane in which Captain Collin Martin perished.

The Guyana Civil Aviation Authority (GCAA) is preparing to launch an intensive probe into a plane crash at Eteringbang Tuesday afternoon that claimed the life of a Roraima Airways pilot- an incident that has plunged the domestic carrier into mourning.

Field said the investigation would include an autopsy, examination of the wreckage, interviews with the pilot of the other Roraima Airways plane and witnesses. “I don’t think we will be short of witnesses because anytime an aircraft is heard overhead, there is always a lot of people coming out to see – just to enjoy, to see the sight of an aircraft- so we shouldn’t have too many problems to find individuals who can be interviewed,” he told reporters. Already, the GCAA Director General has been able to ascertain from the other pilot that visibility was good. 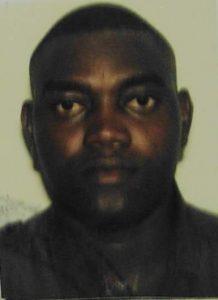 Chief Executive Officer of the Roraima Group of Companies, Captain Gerry Gouveia said the incident was now in the hands of civil aviation investigators, but so far the plane, bearing registration number 8R-GRA, and another Roraima Airways plane left Ekereku and were about to land at Eteringbang  to overnight when the incident occurred. The planes and crew are covered by the relevant insurances, he said.

“The only report that we have so far is that the aircraft was closing off its operations for the day. It was empty, the pilot was flying alone and going into land when the aircraft crashed. We don’t have any indication at this time- the reason it happened,” Gouveia told reporters.

Sources said the plane went down at approximately 5:48 PM about 200 metres on the approach to the Eteringbang airstrip.

The CEO hailed Captain Martin as an “experienced and wonderful pilot” who was working with the domestic carrier for at least six years during which time he emerged as “out star evacuation pilot”,sacrificing his life to save many lives.  “He is a great loss to Roraima. The entire Roraima team is very, very shaken at the moment,” he said of the former Guyana Defence Force (GDF) Major who served in the Special Forces. 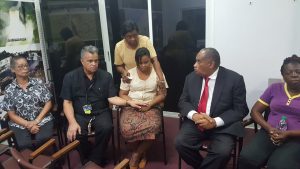 Dr. Roberta Martin (centre) being comforted by her mother and Captain Gerry Gouveia while Wesley Kirton (red tie) speaks with the media on her behalf.

Unconfirmed reports are that the two planes were conducting an overpass when  the Britten-Norman Islander that Martin was flying almost flipped before nose-diving. “We have no information of an overpass but when you fly in the interior, it’s not unusual for pilots to fly over the runway to check. These are uncontrolled runways. I don’t know if he did but if he did, he was following correct procedure because you don’t have a control tower to tell you the runway is clear,” he said. The CEO said the other pilot who was flying immediately behind him did not receive any distress call, and so “whatever happened, happened suddenly.”

As the news of the passing of Martin spread, many of his colleagues and friends flocked the Roraima Airways operations office at the Eugene F. Correia ‘Ogle’ Airport to express their condolences to his wife, Dr. Roberta Martin, and family as well as Roraima Airways staff. 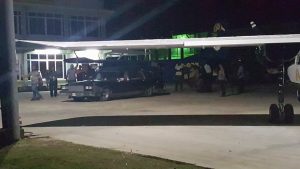 A hearse leaving Roraima Airways’ hangar with the body of Captain Collin Martin shortly after it was flown from Eteringbang aboard the plane also seen in picture.

Wesley Kirton- who related the sentiments of Captain Martin’s wife in the presence of her and her mother,  his mother and Captain Gouveia and Mrs. Gouveia- asked the media to “allow her to go through her period of mourning and come to grips with what has happened.” “This has come as a great shock and tremendous loss to the family.”

Dr. Martin is a lecturer at the University of Guyana and the doctor-in-charge at the Kitty Health Centre.