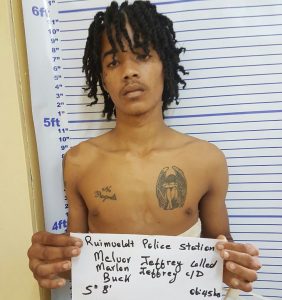 CAUGHT IN A BARREL: Marlon Jeffery

A man, who escaped from custody while he was a patient at the Georgetown Public Hospital Corporation (GPHC), was Sunday morning arrested inside a barrel at a house at Agricola, East Bank Demerara.

“Wanted person Marlon Jeffery who escaped from the GPHC, was this (Sunday) morning recaptured at a house in Brutus Street, Agricola.

Four persons, inclusive of two females who were in the house, have been taken into custody. Marlon Jeffrey was found hiding in a barrel,” Guyana Police Force spokesman, Superintendent, Jairam Ramlakhan told the media.

Also known as “Melvor Jeffery” or “Buck”, he was wanted escaping from lawful custody at the hospital on July 19, 2017.

“He was held for possession of firearm and ammunition and two counts of discharging a loaded firearm.,” police said.