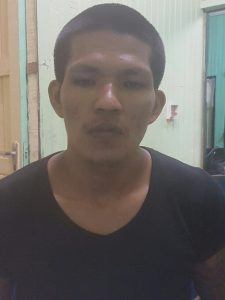 One of the six prisoners, who escaped from the Georgetown Prison, was recaptured Friday, police said.

“At 22:50hrs last (Friday) night acting on info, ranks proceeded to an abandoned house on a access dam at Canal # 1 West Bank Demerara where Desmond James was arrested. He indicated that he was heading to Essequibo. He was found with a knife and a few pieces of clothing,” police said.

The others who still at large from the Georgetown Prison during the fire on Sunday, July 9, 2017 are Cobena Stephens, Cornelius James, Royden “Durant” Williams,  and Stafrei Hopkinson. Williams was earlier this year convicted and sentenced to death for eight murders at the Bartica massacre on February, 2008.

They are all wanted for murder and escape from lawful custody from the Georgetown Prison.

During the fire, Prison Officer Odinga Wickham was shot and subsequently died at the Georgetown Prison. Seven other prison officers were also shot and chopped during the blaze that engulfed all of the wooden building that made up the colonial-era jail on Camp Street.

The more than 1,000 prisoners were later that Sunday night and early Monday morning relocated to a walled pasture at Lusignan, East Coast Demerara. Authorities have since been able to reduce that number to about 700 inmates by transferring many of them to several other prisons, granting early release to others, and also reducing bail or granting self-bail to others.