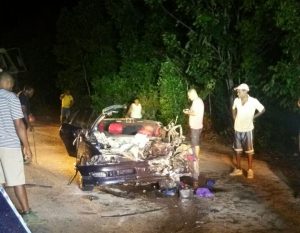 Three persons were killed and one other was critically injured early Friday night when the car they were travelling in slammed into a parked heavy duty truck, police confirmed.

The accident in the vicinity of Kairuni at about 7:30 PM. The car involved in the accident is bearing license number plate PHH 9398.

Guyana Police Force spokesman, Superintendent Jairam Ramlakhan confirmed that one man died on the spot and two others succumbed while receiving medical attention at the Linden Hospital.

Junior Hutson,29,  of Industrial Area Linden has been admitted at Mackenzie Hospital while Rayon Wilson who was the car driver was referred the Georgetown Public Hospital. Wilson is a policeman who is stationed at Bartica. 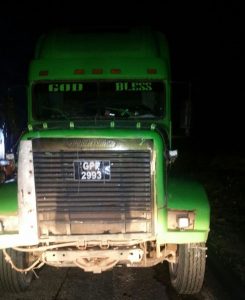 The parked truck into which the car slammed on the Linden-Soesdyke Highway.

Ramlakhan said, “Investigations so far revealed from the driver of the lorry that he was proceeding south along the eastern side of the road when his vehicle developed some mechanical problems, causing him to stop and whilst in the process of effecting repairs under the front of the lorry, he heard an impact at the rear, and upon investigating discovered that the car which collided with his vehicle, had five males occupants and all of whom appeared seriously injured.”

A volunteer reporter at the scene told Demerara Waves Online News that the entire roof of the car was ripped off on impact.