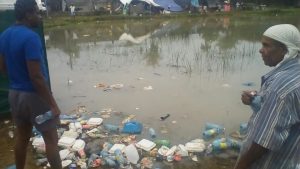 The flooded walled Lusignan pasture where prisoners, who were removed from the Camp Street jail, are being held.

Sources said the prisoners, numbering just about 500, began banging the door to demand that they may be moved from the swampy pasture to a habitable area of the Lusignan Prison.

Fire Chief Marlon, Gentle also confirmed that fire fighters went into action after several flambeaus were lobbed at the main Lusignan prison building at about 2 O’clock Friday morning. Fire fighters are usually on standby outside the Lusignan Prison.

Police and fire fighters said the prisoners made the flammable devices by accessing fuel from a generator that is located in the walled area where the prisoners are being kept. 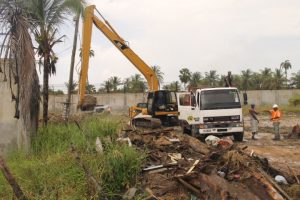 Early hours of construction works at another section of the Lusignan Prison property where a shed would be built and the land asphalted so that the prisoners could be removed from an open pasture where they are exposed to rain and sun.

Investigators believe that the prisoners used material from tents that have been provided by the Civil Defence Commission (CDC) and put them in the bottles with the fuel.

Police said due to the fact that authorities needed to urgently move the prisoners from the burnt Georgetown Prison to Lusignan, the generator was not removed from the holding area. Now, police sources said, efforts would be made to do so. 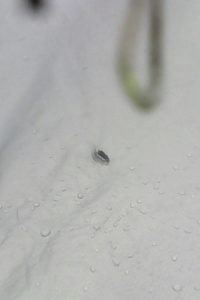 A bullet hole at the Lusignan holding facility

While Director of Prisons, Gladwin Samuels did not immediately respond to questions about the situation there, other security service sources said one prisoner was shot to his eye after the inmates became restive during extremely heavy rain during late Thursday night and early Friday morning.

Eventually, a gunshot was discharged, grazing a prisoner to his right eye.

Meanwhile, Public Security Minister Khemraj Ramjattan reiterated at a news conference on Thursday that workers were working around the clock to asphalt another highly walled area and build sheds to remove the inmates who are in the pasture. Ramjattan said one of government’s priorities is to ensure that international laws and local procedures are followed in the handling of prisoners.

The Ministry of Public Infrastructure and private entities are spearheading those works.

Meanwhile, police on the East Coast Demerara have so far received more than 50 leads about the whereabouts of the six prisoners who fled from the Georgetown Prison during the Sunday, July 9, 2017 fire. However,  police and soldiers have so far come up empty handed.