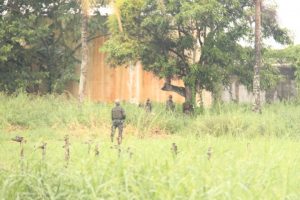 Soldiers guarding the wall behind which most of the 1,000 inmates from the Georgetown Prison have been relocated temporarily.

More than 180 of the just over 1,000 prisoners, who have been dislocated by a fire at the Georgetown Prison, were Monday sent to other prisons, Director of Prisons, Gladwin Samuels said.

Samuels said 188 inmates, including those sent on their own recognisance by magistrates, were removed from the Lusignan holding facility and the exercise would continue on Tuesday.

Demerara Waves Online News was told by other sources that 150 inmates were expected to be transported to the Mazaruni Prison.

Samuels said the count of the number of inmates has since been revised downward from the first number of 1,018, but he declined to say what is the new figure. “No, I will not disclose to you how much I am not accounting for, It’s not many,” he told Demerara Waves Online News. Of the 1,018 inmates originally mentioned, five have escaped from custody.

Fire fighters were up to Monday afternoon combing the debris at the Georgetown Prison to ascertain whether anyone perished by burning.

Several magistrates visited the Lusignan Prison to allow a number of inmates on bail for non-violent offences to leave on their own recognisance. Authorities were also expected to consider releasing a number of inmates before the end of their sentences because they have been behaving very good. 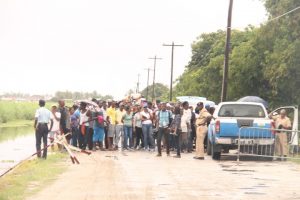 Relatives at the police barricade demanding that they be allowed to see the inmates.

Authorities said the five escaped while police and prison guards  were distracted by fires that those inmates had set to the decades-old wooden buildings that had made up the prison complex.

The Director of Prisons suggested that a tense calm prevailed over the Lusignan holding area that is essentially a vacant grassland that is secured by a 15-foot tall fence and barbed wire. “It is more calm than volatile. The fact that anybody is displaced it will have some setbacks. They are cooperating with us,” he said.

Earlier Monday, one gunshot rang out and prison guards, police and soldiers were seen scampering to an area where an inmate had been seen attempting to scale the fence.

Many of the prisoners from the Georgetown jail were transported by truck, under heavy guard, to the Lusignan facility.

The Civil Defence Commission has since been activated and has been providing emergency supplies of water, food, sheds and other items.